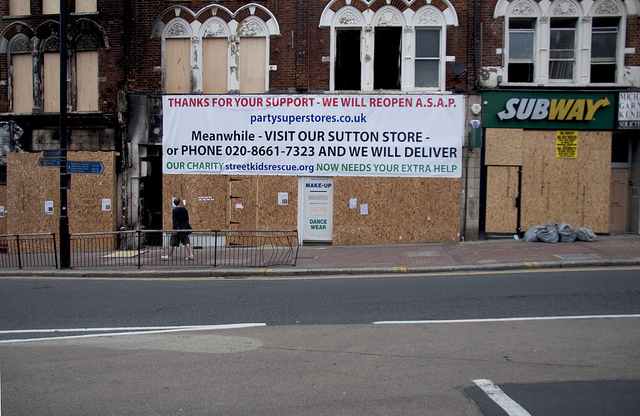 Papers are starting to look into the demographics of the people who took part in last month's riots. The FT has looked at the (not publicly accessible) addresses of those charged, and found that over a third of suspects live in the poorest fifth of London.

Two-thirds come from areas with below-average income, and the FT's number crunchers have found that if you divide London's neighbourhoods into ten groups based on income, you find 11 extra suspects each time you go down a stage.

While taking a moment to say that correlation does not equal causation, and accepting that plenty of people on and below the breadline didn't pop into Currys and nick a telly, the data is starting to suggestion a link between unrest and deprivation.

The Guardian's been looking at the raw information as well, mapping where suspects live and looking at factors like age and employment. The typical picture of a looter seems to be of a young, unemployed male about 18-20 years old. There's also a map plotting incidents over unemployment and deprivation.

While some of the self-justifications of looters are clearly bollocks (listen, again, to the two girls from Croydon saying businesses were targeted because the owners were "rich", and then look, again, at some of the small, independent, shops that got smashed up), it's not entirely ridiculous to suggest there's a seam of anger in certain sections of the city, a difficult-to-precisely-articulate anger about lack of jobs and opportunities and poverty and stop and search, that was just waiting for something to tip it over. 'Cos, like, happy contented people tend not to form a mob.