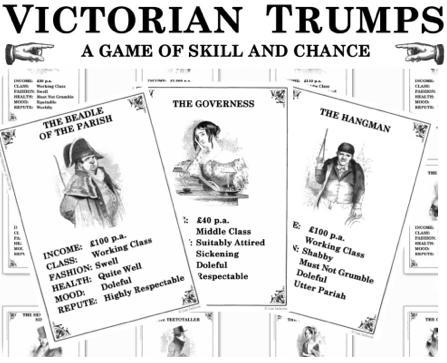 Every day until Christmas we will be pointing you in the direction of a Christmas present that (with a bit of luck) you won’t already have on your list. Climb up onto our collective lap and we’ll see what we can move from our sack to your stockings…

If there werea London Website Hall Of Fame, Victorian London would be one of the first inductees. The site, curated by Lee Jackson, is celebrating its 10th anniversary by launching a set of 'Victorian Trumps'.

The card game follows the popular school-yard pastime, where opponents win cards off each other depending on who's got the highest values. Instead of comparing fighter aircraft, dinosaurs or superheroes, however, Victorian Trumps concerns itself with 19th Century occupations.

The Beadle beats The Factory Child, both literally and in most categories. The Apothecary trumps The Chimney Sweep in all ways save their 'mood', which is matched at 'Equitable'. Both Governess and Postman are equal in fashion, ranking as 'suitably attired', while the smug Medical Student raises his attire to 'swell'. And so on.

The laminated cards are neatly illustrated with caricatures by Victorian artist Kenny Meadows. On the reverse, you'll find a rather special advert for a 'rocking bath', which "Gives the FULLEST ILLUSION of a Sea or River Bath...keeps the blood in ACTIVE circulation".

Order your cards, priced just £5.50 plus postage, via the Victorian London website.