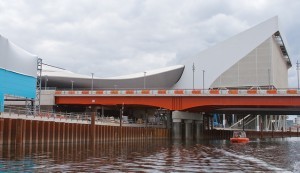 The US wants to send 1,000 of its own security agents to guard American athletes at next year's Olympics, amid reports that the organising committee have underestimated the number of security guards it needs by about 11,000.

The Guardian's got wind of tensions between LOCOG and the States, who are badgering the committee over security concerns. The paper quotes one unnamed official as saying

"The Americans are risk-averse, with a capital A and underlined. They want to see everything. We are not equal partners in this. They want to be on top of everything – building protection, counter-terrorism strategy and VIP security – everything."

It seems Washington is unhappy about the repeal of Section 44, which authorised blanket stop and searches, and want to ship in 500 FBI agents and 500 diplomatic security agents – some of whom will be packing. Tsk. Have they not heard the SAS will be in town?

Is this international willy waving or is it justified concern? It also turns out that Games planners asked security firm G4S to provide 10,000 security guards for Olympic venues, but now realise they'll need closer to 21,000. G4S has under a year to find trained security guards – unlikely – and even then the committee doesn't have the money to pay for them. So they've turned to the Ministry of Defence and requested up to 6,000 military personnel to help, which will end up coming out of the MoD's already stretched budget.

12,000 police officers are expected to be on Games duty nationally; add in sponsors' private protection and Olympics security will be a proper mishmash. Will anybody be in overall control in case something major happens? Or, on a day-to-day basis, will there be a set of common rules or will we see more stories like this one: an Occupy camper, in St Paul's yesterday to pay her remembrance respects, was told to leave by private (not Cathedral) security because there was royalty around?

Photo of the Aquatics Centre by gary8345 from the Londonist Flickr pool.