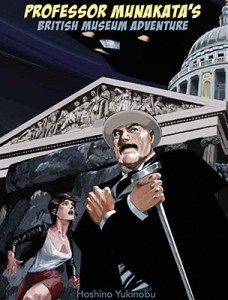 We're not going to pretend some deep-seated knowledge of manga that we don't possess, but this new release looks intriguing whether you're a fan of the artform or not. Hoshino Yukinobu's latest Professor Munakata adventure has the eponymous ethnologist unravelling the 'mystery of the missing Stonehenge megaliths and the threats to the British Museum's treasured holdings'.

This Friday (25 November) the Museum holds a special event to mark the novel's release in English. Nicole Rousmaniere will describe the Museum's role in the creation of the story (excerpts were displayed there two years ago), while Paul Gravett, Director of Comica Festival, places the book into a wider context.

The discussion about Professor Munakata's British Museum Adventure takes place at 6.30pm on 25 November at the British Museum. Tickets are £5/£3. The story can be purchased here.