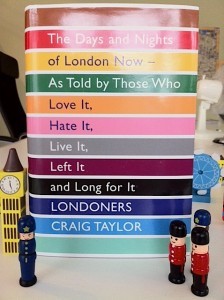 We've found the best book about London in at least a decade. Its full title is Londoners: The Days And Nights Of London Now – As Told By Those Who Love It, Hate It, Live It, Left It, And Long For It, but friends (and there will be many) call it just Londoners. It's by Craig Taylor, it's out now, and it should be on the Christmas wish list of everyone who lives in the capital.

The idea is simple. The author lets Londoners do the talking in 83 carefully chosen interviews, mostly delivered as monologue. It's a masterful work of curation. Every account is a gem, revealing sides to London you never knew were there. Like the innards, the cover is also a testament to the power of simple ideas: an eye-catching series of stripes in the colours of the Tube. Any Londoner will immediately gravitate towards it.

The book opens with a snarl, a denouncement of the metropolis from someone who lived here and had to get out. We're then above the clouds with a commercial airline pilot who describes the 'almost angelic' views of the city from above. Then it's back down to earth with a bump, as our third voice describes his time living on the streets amid the punch-ups, pigeons and smells of stale cider.

The first-person accounts of Londoners going about their business remind us of Sukhdev Sandhu's seminal Night Haunts. But Londoners goes much further, casting its net wider and capturing tastier fish. Cleverer people than us (including Sandhu) have dissected the book for its sociological worth, but in more prosaic terms, it's simply a cracking and insightful read that will make you think again about the individuals in a London crowd...and perhaps even talk to them.

Having read several hundred books about London in our time, we can say with some objectivity that this is among the very best. Londoners is one of only a handful of early 21st Century documentations of the city – among them Peter Ackroyd's Biography and Stephen Walter's map The Island – which will still be widely enjoyed 50 years from now. Treat yourself to the hardback, for you really are investing in a classic.

Londoners by Craig Taylor is out now from Granta. Buy it here.

Craig Taylor will be discussing his book at Chipping Barnet Library on 19 November. Details here.