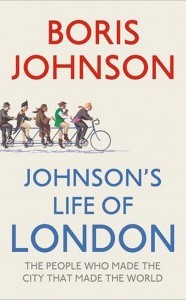 The Mayor of London has a new book out. Purportedly a history of the city, Johnson's Life of London is really a cherrypicked set of mini-biographies that together give an impressionistic view of the past 2000 years. It's a flawed but gripping read.

His choice of subjects is attractive, if quirky. Alongside the usual suspects (Chaucer, Whittington, S Johnson, Churchill...), the author also rehabilitates several lesser-known or unlikely luminaries from London's history. There's barely a mention of Dickens, for example, but journalist WT Stead gets a dozen pages. The late 20th Century is represented by Keith Richards, who Boris stalks around town in deferential awe, bordering on the controversial: "if he didn't look so epically raddled, you might be tempted to say that he was an advertisement for the health-giving properties of very pure heroin and cocaine". The main chapters are interspersed with vignettes about 'sundry London inventions' including the rules of football and the bike (even though it's not a London invention).

Boris Johnson writes in exactly the same way as he talks. You can almost hear the 'ah, well, ums'. His patented brand of clodhopping eloquence is a delight to read, even if you disagree with what he's saying. The Roman procurator behaved 'like a real swine...whacking up taxes'; London is like a 'gigantic undersea coelenterate'; certain monks were 'hogwhimpering drunks'; Lord George Gordon was a 'bonkers MP'...and so on. This will grate with some, but the congenial tone certainly sets Johnson's book apart from more conventional histories. We can't imagine AN Wilson starting a chapter on Roman London by parking his bike in the middle of Gracechurch Street and risking 'a few toots from the motorists' while he pondered the ancient settlement.

As you might imagine, the book often strays from the historical and into the Mayor's political agenda. "There's a growing body of support for a new hub airport...in or around the Thames Estuary," we're assured in a chapter about the Midland Grand Hotel. Similarly, a section on Bazalgette's Victorian sewers is used to make the case for the Thames 'super sewer'. Namesake Samuel Johnson was a 'passionate Conservative'. Boudica is compared to Margaret Thatcher.

Finally, the person who designed the cover has earned a pint. The main image shows Boris at the prow of an extended velocipede, with his various biographical subjects pedalling to the rear. The typeface is something close to Johnston, the famous London Underground font and near-namesake of the Mayor. Sterling work.

In conclusion, you probably won't find a more idiosyncratic or readable history of London, even if it's as much about Boris and his worldview as the city he clearly loves. It's telling that there are seven mentions of Margaret Thatcher, but none of Ken Livingstone.

Johnson's Life of London by Boris Johnson is out now from Harper Press. Buy here (hardback) or here (Kindle).