The Southampton Arms Named CAMRA's 'London Pub of the Year' 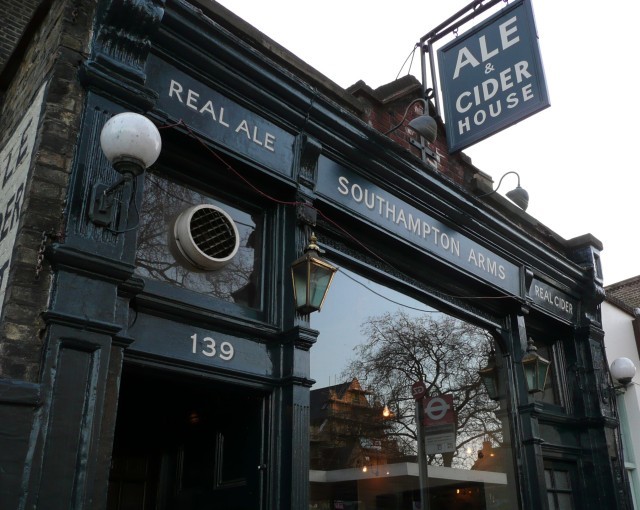 According to real-ale enthusiasts CAMRA, The Southampton Arms in Kentish Town is currently London's best pub. More specifically, it has won their 'London Pub of the Year' award for 2011, meaning it will be put forward for CAMRA's 'National Pub of the Year' (currently held by The Harp in Covent Garden).

This is a significant achievement for a pub that only opened, in its current form, a couple of years ago. However the pub's focus on good, independently-brewed beer and cider has made it very popular with London's ale aficionados, and its relaxed atmosphere and refurbished traditional décor has helped widen its appeal further. We were very impressed on our visit last year, and it's clear from this award that we weren't alone in our appreciation.

To quote Kimberly Martin from CAMRA:

The refurbishment reflects the ethos of an ale house. They left the old wooden bar intact, painted and decorated and adorned the walls with old memorabilia. The main thrust of this pub is conversation and good beer (or cider) and the set up of tables makes it almost impossible not to make new acquaintances. It attracts people from all walks of life; from students to grandparents, all are welcome. And what a choice the customers have. There are ten real ales, seven ciders and usually a perry. The Southampton really is a worthy winner of CAMRA London’s Pub of the Year Award.

Of course, as happened with The Harp when it won its award, there's a fair chance that The Southampton Arms may now evolve from an already very popular pub into one that is decidedly over-subscribed. Such is the price of success.

The award will be presented at 7.30pm tomorrow.

Check out our write-up of The Southampton Arms from last year, or pay them a visit at 139 Highgate Road, London NW5 1LE.