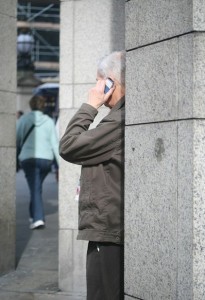 The Met has bought technology that allows it to track, intercept text messages and get information from mobile phones across an area of 10km2, the Guardian has found.

A couple of years ago the police force paid £143k to a company called Datong, which supplies "intelligence solutions for international military, law enforcement and intelligence agencies". The Guardian puts that into more day-to-day language: the hardware can shut phones off remotely (to prevent remote triggering of a bomb) but can also make your phone use the police's own network, giving up your IMSI and IMEI identifying numbers - which allow your phone to be tracked and, combined with information from other handsets in the area, show who you're meeting up with. It can also intercept your calls and messages.

£143k is a lot of money to spend just to be wheeled out in the event of a terrorist threat. The Met have refused to confirm or deny whether the tech is used during protests; but, given their bizarre stance on sending undercover operatives into protest movements, we wouldn't be surprised. So if you've been down to check out OccupyLSX, there's a chance the police know about it.