Book Review: Bryant & May And The Memory Of Blood By Christopher Fowler

By M@ Last edited 105 months ago
M@ Book Review: Bryant & May And The Memory Of Blood By Christopher Fowler 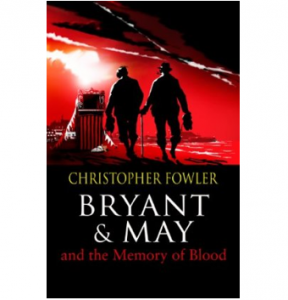 There's nothing quite like settling into a new Bryant & May novel. The long-running series by Christopher Fowler pitches two octogenarian detectives and their 'Peculiar Crimes Unit' against the most malign and macabre set of villains that Old London Town has ever thrown up. This time round, our aged heroes are on the trail of a baby-murderer; one who leaves no prints and seemingly takes the form of a sinister Mr Punch puppet.

As ever with Fowler, London plays a leading role in proceedings: from the PCU's headquarters in a former haunt of Aleister Crowley (a step down from their previous home above Mornington Crescent Tube) to the first crime scene on Northumberland Avenue, to an incident involving a bridge and a banker that'll ring bells with students of London's criminal history. You won't find many detective novels where the protagonists find a plausible way to assemble their suspects in the London Dungeon.

The fast-paced main plot, a whodunit involving a theatrical troupe, love triangles, dodgy financing, and that Mr Punch puppet, is neatly interlaced with a secondary thread concerning the possible theft of Arthur Bryant's memoirs. The ending, which of course we can't reveal, is not so much a cliff-hanger as a cliff-approacher. Even after several thousand pages of B&M spread over nine books, Fowler still leaves the reader desperate for more.

Bryant & May and the Memory of Blood by Christopher Fowler is out now from Doubleday. Buy here. Follow the author's (very Londony) blog here.