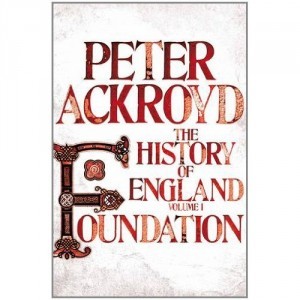 Peter Ackroyd is a very busy man. It's less than five months since his last non-fiction release, London Under. Now he embarks on a six-book mission to chart the history of England.

Volume I is subtitled Foundation. It spans almost a million years, from the first evidence of hominid occupation up to the early years of the Tudor dynasty. The book follows a traditional chronological format, but also includes short thematic chapters on, say, medieval food or foreign views of the English.

Given the epic scope, Ackroyd's prose is a surprisingly easy read. Unlike many grand histories, there is no obvious thesis or reinterpretation here, just a highly readable narrative of stuff that happened. No new angles but plenty of Old Angles.

If you're looking for a meticulously cross-referenced work of historical scholarship, there are better options out there. If, however, you want an account that conjures the distant past with the fizz of a very well-informed storyteller, Foundation is about as good as it gets.

Volume II, on the Reformation, is due in autumn next year, with subsequent volumes every two years.

Below is an exclusive extract from Foundation, covering one of the book's many London-based events: the Peasants' Revolt of 1381.

The movement grew much more dangerous when, on 11 June, the rebels of the various regions agreed to march or ride upon London. That was the centre of their woes, the home of the lawyers and the royal officials. It has been estimated that some 30,000 men were now on the road. The men of Kent, always the most fierce, went northwards, while the men of Essex came from the east and the rebels of Hertfordshire from the north. The Hertfordshire men made a camp at Highbury, while the men of Essex rested and waited at Mile End. It was at this point that they were informed of risings all over England. Riots erupted in Norwich and in St Albans, in Winchester and in York, in Ipswich and in Scarborough.

The Kentish men, under the leadership of Wat Tyler or Wat the tiler, gathered on Blackheath on 12 June. The king had retreated to the Tower of London for safety, but on 13 June he and his most trusted councillors agreed to meet the main body of protesters on the heath. The royal party sailed in four barges down the Thames in order to land at Rotherhithe, but too many rebels were clustered on the south bank to allow a safe landing. The young king could now quite clearly hear the terrible shrieks and cries that would soon echo through the streets of London. A chronicler reported that the rebels ‘made such a great clamour that it really seemed as if the devil himself had joined their company’. The barge returned to the Tower.

The royal retreat inflamed the rebels. Tyler now led his people to the city itself. They stormed the Marshalsea, in Southwark, and freed its prisoners. Another party burned the tax records held at Lambeth Palace. Then they made their way across London Bridge. The people of London refused to allow the city gates to be closed against them; they sympathized with the cause. They, too, were oppressed by royal exactions on behalf of an unpopular war. The crowd surged along Fleet Street, opening the Fleet Prison and pillaging the lawyers’ quarter of New Temple. The Londoners, now invigorated by their example, burned down the residence of John of Gaunt, the Savoy Palace, and killed many of his officials. As the leading nobleman of England, during the minority of the king, Gaunt was the most hated.

The young king surveyed the scene of looting and burning from a window of the Tower, and asked what should be done. No one knew. But at fourteen he was old enough to think for himself; he would ride out to Mile End and address all of the rebels. He hoped that this would draw them from the city into the eastern suburb, and thus allow his court and household to escape from the Tower. In this, he was only partially successful.

On Friday, 14 June, he made the short journey to Mile End on his horse. He was accompanied by the mayor of London, William Walworth, and some of the household knights. He was already showing signs of personal courage worthy of a king. When the royal party approached the rebels knelt upon the ground, and some of their number shouted, ‘Welcome, King Richard. We wish for no other king but you.’ Richard then asked them what else they wanted. They wanted ‘the traitors’, by which they meant the officials who had taxed them and harassed them beyond measure. They wanted to remove a government of scoundrels. The king replied that he would surrender to them any men who were convicted of treachery according to the law. It was a convenient answer to turn away wrath. One of their other demands was that all serfs should be given their freedom, and that land should be rented at fourpence per acre (0.4 hectares). Richard agreed to these proposals. Certain ‘traitors’, however, were already being summarily despatched. A group of rebels had entered the Tower, in the king’s absence, and had dragged out the archbishop of Canterbury and other officials who were sheltering there. All of them were beheaded on Tower Hill, the site of public execution.

More blood was to be shed in this fortnight’s storm. The people of London and the suburbs were confronted by groups of rebels and asked ‘With whom holdest thou?’ If they did not reply, ‘With King Richard and the commons’, they were beaten up or even beheaded. The rebels declared that they would have no king with the name of John, a clear reference to John of Gaunt. All over England the manors of lords were now being pillaged, and their inhabitants killed. Lawyers and justices were seized, and tax records burned. The proceedings of one manorial court are typical; the heading of one page reads curia prima post rumorem et combustionem rotulorum: ‘this is the first court after the revolt and the burning of the rolls’.

War and plague had done their work. At approximately the same moment of the fourteenth century, popular rebellions emerged in neighbouring nations. In Flanders the commons had rebelled against their count, Louis, and swept him out of the country; the Jacquerie, in France, unleashed a wave of riot and bloodshed in Paris, Rouen and the surrounding countryside. In Florence a popular revolt of the wool carders and other workers, the ciompi, destroyed the political structure of the city.

The morning after the young king’s ride to Mile End, on 15 June, Richard came to parley with the rebels at Smithfield. Wat Tyler waited for him there at the head of 20,000 insurgents. As soon as Tyler saw Richard, he rode up to him and began to converse with him. There is a hint that at this point he seemed to be threatening the king, or at least treating him disrespectfully. He began to play with his dagger, and then laid his hand on the bridle of the king’s horse. At this point, fearing treason, the mayor of London stabbed a short sword into Tyler’s throat. Tyler rode a little way, fearfully wounded, and was taken to the hospital of St Bartholomew beside Smithfield.

The rebels were shocked and angered at the event; some of them drew their bows. The young king galloped up to the front line of archers. ‘What are you doing?’ he called out to them. ‘Tyler was a traitor. Come with me, and I will be your leader.’ He did literally lead them a little way north into Islington, where 1,000 armed men had been summoned by the mayor. It seems likely that the rebels had walked into a hastily improvised trap. The leaders fell to their knees, and begged for pardon. Some of the court wished to punish them on the spot, but the king wisely desisted. He ordered the rebels to return to their homes, and forbade any stranger from spending the night in the city. Soon afterwards Tyler was taken from the hospital of St Bartholomew and beheaded in Smithfield itself.

The History of England Volume I: Foundation by Peter Ackroyd is out now from Macmillan. Buy here.