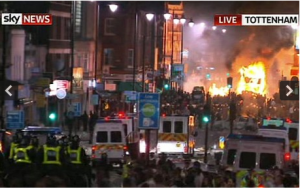 Eight police officers were injured in Tottenham overnight, as violence broke out on the streets of north London. The crowd, estimated at 300 people, hurled petrol bombs and assorted missiles at police, setting fire to buildings and vehicles, including police cars and a bus. There are also reports of looting on the Tottenham Hale Retail Park, where youths raided PC World and JD Sports.

The idiocy followed a peaceful vigil for Mark Duggan, who was shot dead by police on Thursday under yet-to-be-determined circumstances. Duggan, described by The Sun as a 'suspected gangster' and a father of four, is said to have fired at a police officer, who was saved when the bullet hit his radio. The full chain of events is still under investigation.

The repercussions began on Tottenham High Road before spilling into Tottenham Hale.  Incidents were also reported in Wood Green. The Met have opened their Gold Command Control centre, a special command post used only for major operations, amid fears that the violence could spread further. Sky News got some video footage before themselves being forced out of the area by the mob.