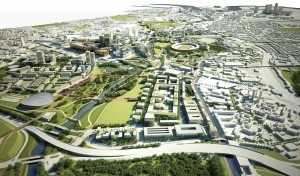 London will get five new neighbourhoods after the Olympics, all named by members of the public.

The pentet of place names were announced today on the Robert Elms show on BBC London radio. They are:

An appropriate and largely non-controversial selection, we reckon. Although, given our earlier post on the state of the River Lea, we have to wonder about Sweetwater. And it's a pity they didn't create a Walford to match the E20 postcode.

A phased reopening of the park will begin in 2013, with families moving into the new conurbations in 2015.

What do you think about London's newest neighbourhoods?