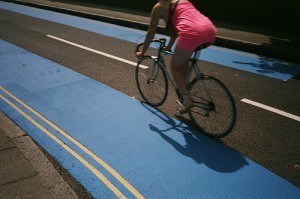 A year to the day that the first two opened, London's pedal-pushers can officially ride on a pair of new cycle superhighways from today.

CS2 runs from Bow to Aldgate along Whitechapel Road (a truncated version of the original route, which was banned from Newham thanks to the interference of mayor Robin Wale), and CS8 wends from Wandsworth to Westminster. Maps for both can be found on the Transport for London website. The BBC's Tom Edwards has been out in east London following the route of CS2, where he's already found one truck driver who isn't playing by the rules.

According to TfL, the superhighways become "fully operational" today, although anybody passing near the routes will have seen scraps of the bright blue lanes emerge over the past eight months or so. As they're little more than demarcated sections of existing road, there's been nothing to stop cyclists using them before; presumably they've been given an official opening date so that TfL can start the meter rolling for usage statistics.

Speaking of which: new figures from TfL suggest that the existing superhighways have proved a hit, with an 86% increase in cyclists for the Barking - Tower Gateway route, and a 46% increase on the Merton - City route. They may be little more than double-width cycle lanes that, according to critics, are inconsistent and offer a potentially dangerous illusion of safety on the road, but they seem to be popular.