The Wonderground Map Of London Town

By M@ Last edited 136 months ago
M@ The Wonderground Map Of London Town
'My Pick cannot be surpassed,' boasts an axe-wielding worker in Victoria, no doubt alluding to Frank Pick, who commissioned this gorgeous map for London Underground in 1914.

As you look around the 'Wonderground Map of London Town' you notice hundreds of other cartoon Londoners going about their business, shouting out the in-jokes of another age. 'Give him socks guvnor!', hollers a man in Hammersmith. 'When are those gas tubs coming?', enquires a family in Hyde Park. 'Nothink like wortur fer a chainge, Bill!', contributes the fellow who's leaning into a reservoir where Battersea Power Station now stands. 'Watch this spot between 3 & 4 o'c of an afternoon,' suggests a cryptic message north of the Old Kent Road (here's the spot if you want to try it). What can it all mean? 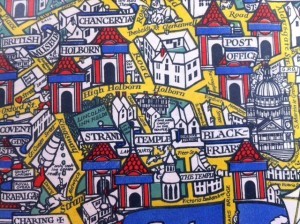 This is the London of a century ago, in a form rarely captured. All the quips and references would have no doubt been intelligible to Tube passengers of 1914, when the map started appearing on the walls of stations. Today, it's not only a work of art but also a fascinating historical document. The Surrey canal still stretches through South London, 'ghost' stations such as Mark Lane remain in service and are depicted like other stations as temples, King's Cross is buried in coal. The city is captured in a jolly, primary-colour mood just months before a war that would change everything. One year later, the city would be rocked by the bombs of the first foreign enemy to attack London for nine centuries.

The artist was MacDonald Gill, a well known poster designer and brother of the more famous Eric Gill (the subject of a minor exhibition at the British Museum). His Wonderground Map is now available to buy in reprint from Old House Books for just a tenner. You won't be disappointed.

The company is well-known for its vintage maps of London. Among other treasures, they sell facsimile maps including London's railways in 1897, the Charles Booth poverty maps and many others.