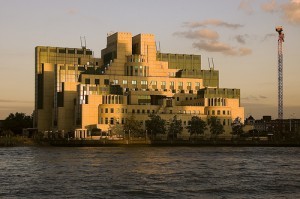 Two French tourists were stopped and questioned by police on Saturday while taking photographs of the MI6 headquarters at Vauxhall Cross.

According to a report, one of the men was searched while police viewed images on their camera. Their personal details were also recorded, despite being allegedly advised by one of the officers that they hadn’t broken any law.

Pressure group I’m A Photographer Not A Terrorist organise regular protests against the harassment of photographers by police under Section 44 of the Terrorism Act 2000. Stop and search powers under this Act were ruled illegal last year. It appears that taking photos of London landmarks, even if those images are freely available on the internet, is still considered suspicious.

Amateur Photographer notes that there are no signs in the area indicating that photography is prohibited.