Police In The Dock Over Phone Hacking 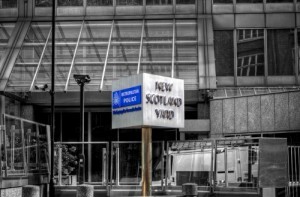 The Met is attempting to salvage its reputation over the phone hacking affair (we would have said News of the World hacking affair, but after yesterday's revelations that The Sun and Sunday Times targeted the medical records of Gordon Brown's son, we're going to widen it to 'News International phone hacking affair'). And it's not doing very well.

As we type, former Assistant Commissioner Andy Hayman is in front of the Home Affairs committee uttering regrets and apologies to the victims, and looking appalled at the suggestion he took money from News International journalists. However, he has admitted being one of the officers who had dinner with NotW staff during the investigation – and the New York Times has uncovered evidence that Hayman may have been one of the senior officers whose phone was targeted by the paper. The NYT raises the not unreasonable issue of whether officers felt under pressure not to investigate too thoroughly, in case their own private lives became the subject of the next Sunday spread.

Incidentally, in 2009, Andy Hayman wrote about the original phone hacking case in The Times (a News International title):

This was not the time for a half-hearted investigation — we put our best detectives on the case and left no stone unturned as officials breathed down our neck... As I recall the list of those targeted, which was put together from records kept by Glenn Mulcaire, ran to several hundred names... Had there been evidence of tampering in the other cases, that would have been investigated as would the slightest hint that others were involved.

Good job there was definitely no tampering then, eh? Oh.

This original, 2006, investigation – that led to the convictions of Clive Goodman and Glenn Mulcaire – was reviewed in 2009 by Assistant Commissioner John Yates. Within 24 hours he decided everything was hunky dory, nothing to see there, move on. He now reckons this decision was a "pretty crap one". Do you think?

Yates's line seems to be that the Met's failure to get to the bottom of the phone hacking stench was the result of mistakes and confusion, not a conspiracy. But with The Guardian continuing to investigate the story, and lawsuits by the likes of Gordon Taylor revealing more evidence within the bin bags of paper taken from Mulcaire's home, it looks less and less likely that the Met could honestly have believed there was nothing else to find. It's not heartening that the best our police can come up with is "honest, guv, we're not corrupt or utterly incompetent, we're just a bit shit". No wonder Keith Vaz MP told Yates his evidence was "unconvincing".

So, while we're all getting rightly angry over News International, let's not forget to turn a critical eye on the role of the police in all of this...

Photo by yorkshire stacked from the Londonist Flickr pool