Met's Relationship With News of the World Questioned 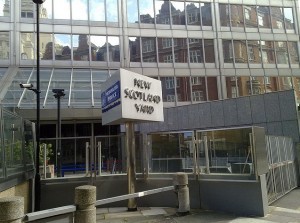 The News of the World phone hacking case just got murkier. It's been revealed that senior Metropolitan police officers, including current Commissioner Sir Paul Stephenson, were having lovely dinners with the paper's editor and deputy editor during the investigation - who, as the Guardian points out, could have been potential suspects.

The Met has been accused before of allowing a cosy relationship with the NotW to influence the scope of the case, but has always maintained a certain air of shock and sadness that anyone would think it capable of such a thing. Obviously we value our liberty too much to suggest it, but we think it calls into question the judgement of London's top coppers.

Lawsuits from celebs like Sienna Miller and Steve Coogan have revealed plenty of evidence that the police had reams of documents indicating journalists other than Clive Goodman and private detective Glenn Mulcaire were involved - but nobody else was interviewed, no other computers were seized. Bear in mind that at the same time, the Met was in the middle of what would turn out to be an 18 month investigation into the Cash for Honours scandal, so were clearly not averse to trawling through paper trails and interviewing multiple witnesses. Yet the NotW case - involving clear and proven illegal activity by at least one employee - was closed after the trial.

The scandal has so far directed most of its popular ire at former Number 10 communications director Andy Coulson. Coulson, you'll remember, was also NotW editor during the time Goodman was getting Mulcaire to hack into phones for scoops on the royal family - something Coulson insists he had no knowledge of, and feels so strongly about not having any knowledge of that he's now resigned twice.

However, we feel the bigger scandal is that the Met is forcing victims of potential criminal acts to request information from them, and putting itself into a position where it can be accused of colluding in a cover-up with the very people it was investigating. Would it not have been easier to sort this out properly back in 2006, and then got on with the job of making London a safer place to be? This is turning into a real balls-up, and the sooner the police re-open a thorough investigation, dispelling any cloud of suspicion, the better.