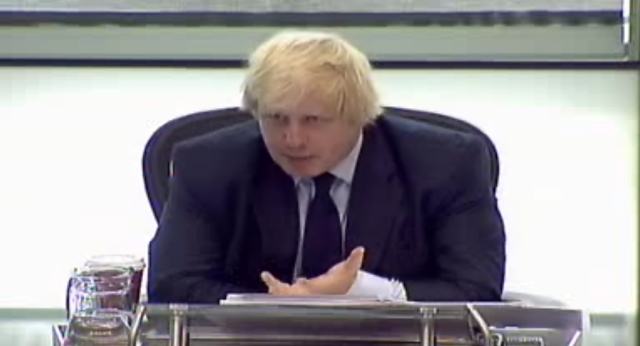 Boris Johnson was questioned by London Assembly members this morning about the phone hacking affair, and his role in the 2009 review of the original investigation (reminder: the one that John Yates spent eight hours looking at before deciding everything was just peachy). Johnson was chair of the Metropolitan Police Authority at the time.

Johnson displayed an astounding lack of seriousness as he blustered his way through the questions in his trademark style – if David Cameron had treated the issue in a similar fashion in Parliament, the nation would be calling for his head.

The Mayor was forced to defend comments made last autumn, when he described the phone hacking affair as "a load of codswallop cooked up by the Labour Party", and the position of Assistant Commissioner John Yates. Even Tory Brian Coleman described Yates as "a lame duck" and pointed out that the Mayor's job is to hold the police to account. Johnson responded that he accepts the Met's line that, as News International didn't co-operate, they couldn't get to the bottom of the matter. If only London had an organisation whose job it was to investigate things.

(By the way, we told you in February that senior Met officers had been having lunches with News International staff while they were investigating the phone hacking. Dee Doocey has now got a confirmed list of those get-togethers and who went, including Ian Blair, Paul Stephenson, Andy Hayman and John Yates.)

Now, the original investigation happened under Livingstone's Mayoralty (though he personally wasn't chair of the MPA) and yes, his action and inactions should be looked into. But we were a little shocked at the way the Assembly kept being derailed away from talking about the nation's outrage over hacking by pantomime setups for Johnson to attack his political rival's links to News International. The Daily Show demonstrated perfectly how to cover hacking the phones of murder victims and relatives of dead soldiers with humour, and this wasn't it. A little less levity please, Boris.

The full webcast of the meeting will be online later this afternoon.