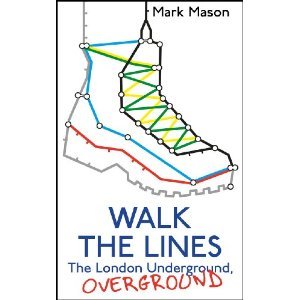 The London underground has inspired more acts of creativity than a spinning satchel of spliffs. Alternative maps, Mind the Gap T-shirts, cult movies, world record attempts... The 11 lines and 269 stations that make up 'the Tube' are far more than assets of transport infrastructure, they are inexhaustible wellsprings for the imagination.

Author Mark Mason takes things 912,384 steps further. In new book Walk the Lines, he travels the entire underground network on foot (above ground, that is). He finds a London of extremes, with countryside in unexpected places, poverty nestling beside prosperity, and parts of the London Underground that aren't within London at all.

Mason is a dogged completer-finisher. He'll walk one branch of the Metropolitan Line, only to retrace his steps for miles to carry on up another branch, rather than catch the train back to the point of divergence. This greatly lengthens the challenge, and the final odometer clocks in at 403.2 miles...almost a mile a page as it works out. There is no slog for the reader, however. You'll find yourself turning page after page in anticipation of the author reaching a part of the network that you know well.

Mason is accompanied by numerous characters during his sojourns, including City planner Peter Rees, a Tube geek, a trainee taxi driver, the Kray twins' biographer and, perhaps inevitably, Bill Drummond. The project (and write-up) is very much in the tradition of Tony Hawkes' Round Ireland With A Fridge, or Tim Moore's Do Not Pass Go: a mixture of witty banter, overheard conversations, historical insight and offbeat observations. You can't help but fall in love with his mad and marvellous mission.

Mason's previous books include a volume on the importance of trivia, and it shows. Every page is littered with facts about the Underground. If you've ever wanted to know what happens in Chalfont and Latimer, who voices the Mind the Gap announcements, or what Ronnie Corbett thinks whenever he walks down St James's Street, then this is the book for you.