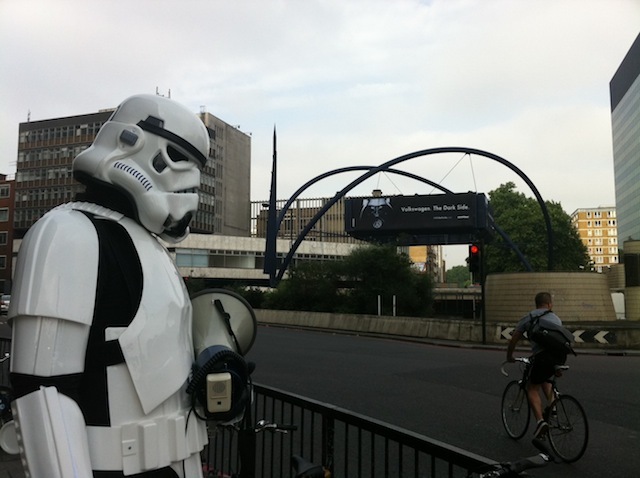 Silicon Roundabout has been captured by Imperial forces. At around 7am this morning, a unit of Stormtroopers took up guard around the exits to the Old Street roundabout. Meanwhile, the Imperial March rang throughout the area.

It's the latest stunt by Greenpeace. Climbers managed to scale the advertising structure above the roundabout and unfurl banners. Their target this time is Volkswagen, whom campaigners accuse of opposing European climate laws.

"But all is not lost," says an information leaflet. "We feel the good in Volkswagen. They have the engineers and the experience to make some of the most efficient vehicles on Earth - we've seen them. That's why all of us in the Rebellion are calling on Volkswagen to turn away from the Dark Side and give our planet a chance."

You can read more about the allegations (from Greenpeace's perspective) here. In the meantime, the protest continues (9am) with very little police presence two hours after it started.

The stunt follows on from the campaign group's Piccadilly shenanigans from a couple of weeks ago, when attention fell upon Mattel.