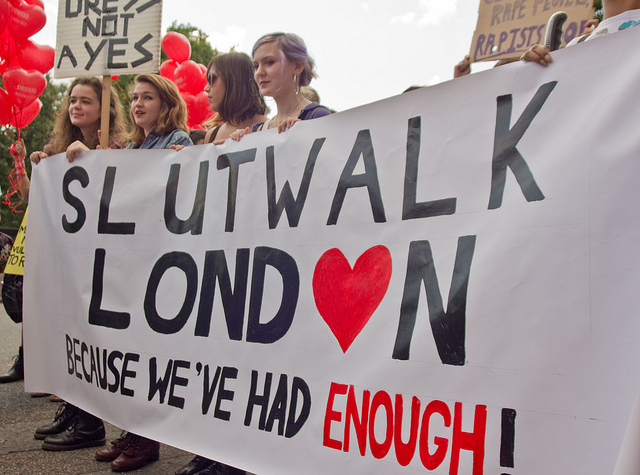 All the hype paid off, with over 5,000 people marching from Piccadilly to Trafalgar Square at Saturday's London Slutwalk.

It's amazing to think that a global movement was sparked by one policeman's foolish comment. The first Slutwalk took place back in April in Toronto, where the fateful statement “avoid dressing like sluts in order not to be victimised” was made, and sister events sprung up all over Canada, the US, and Britain.

The wave of popular support for this cause has given feminism the street-cred it may have previously lacked. It is also timely, tying in with a hoard of other topical issues such as Justice Secretary Ken Clarke's blunder in saying that there are different levels of seriousness when it comes to rape, and the débâcle which has ended Dominique Strauss-Kahn's career as head of the IMF, amid allegations he attempted to rape a New York chambermaid.

The sun shone down on Saturday's protest, as an eclectic group of women of all ages and states of dress hollered “yes means yes and no means no!” A spattering of men also attended to show their support, some of whom even went as far as donning bras and suspenders. While some women were dressed provocatively, carrying placards that read “abuse has nothing to do with sexiness” and the like, the majority wore casual clothes, emphasising that the demo's purpose has grown beyond a reaction to one policeman's sexist comment, to encompass women's rights in general.

At the day's climax in Trafalgar Square a number of respected speakers, flanked by Landseer's lions (who in turn were straddled by some of the more colourful and vocal protesters) addressed the crowd. Laurie Penny, a columnist for New Statesman, gave a compelling speech, countering opposition to Slutwalk: “There is a backlash against female sexual agency. People are frightened of female sexual power. We are here to say no to that backlash.” Kitty Richardson also gave an excellent speech outlining the values of her organisation Rape Crisis, offering some poignant examples of how ignorance can lead to rape victims being mistreated.

The variety of speakers, with different yet aligned concerns, proved how important this movement is in pushing women's rights further, and refusing to allow the issues to stagnate. In the words of Laurie Penny, “There is a future where women and men are truly equal.”