Update: The date of the Slutwalk has been changed to 11 June 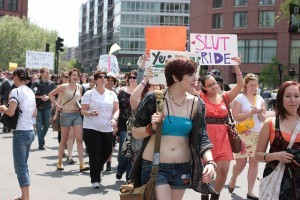 SlutWalk is stirring up heated debate around sexual assault, and even semantics. The London event aims to raise awareness of rape, sexual attacks and unacceptable attitudes to their causes, and follows similar marches in the US and Canada.

The demo takes place on 11 June, starting in Trafalgar Square. Participants can wear 'whatever makes them feel comfortable', with many dressing provocatively to emphasise the main theme of the march. Around 5000 people have signed up to the Facebook page.

The phenomenon began in Toronto, when students organised a demonstration in response to a local policeman’s advice that women should “avoid dressing like sluts in order not to be victimised." He has officially apologised since, but the regrettable remark has made worldwide headlines and sparked a movement.

The name SlutWalk has proved expectedly controversial. Some women have denounced the walk because they find its title offensive. But surely that’s the point? Organisers argue it is more than offensive to blame the victims of rape rather than the perpetrators.

This high-profile event highlights not only this point, but that rape remains an incredibly touchy subject in countries where sex isn’t generally a taboo. Statistics for reporting sexual assault and related arrests are abysmal.

You can join the march on 4 June, 1pm, at Trafalgar Square. All welcome, and wear whatever you want.

By Jemma Bicknell. Image of SlutWalk Boston by Tankgirlrs under a Creative Commons licence.