By M@ Last edited 136 months ago
M@ Book Review: The Hardy Tree by Iphgenia Baal
Old St Pancras church yard, just north of the station, is one of those odd and ancient corners of London where history groans from every shrub. We mentioned it only a couple of weeks ago, as the burial place of John Soane, whose tomb inspired the red phone box. The small burial ground, one of the oldest Christian sites in the country, is also associated with Percy Shelley, who used the unlikely spot to declare his love for Mary, author of Frankenstein, while visiting the grave of her mother, Mary Wollstonecraft. 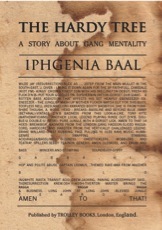 Among the many other oddments in this place stands the 'Hardy Tree', a lofty ash surrounded by a ring of tombstones. Iphgenia Baal reveals the story behind it in new book The Hardy Tree.

In 1846, the future novelist and poet Thomas Hardy was employed to help clear an estimated 10,000 graves that stood in the way of the rail link into St Pancras. Baal describes the morbid efforts of his 'Resurrection Men' to shift the human remains to a nearby reburial plot, dancing in and out of Hardy's mindset, unearthing local characters and legends, then shifting to our own times and the Channel Tunnel rail link that once again disturbed the ground of St Pancras.

Actually, 'describes' is an insufficient word. This inventive little book pieces the story together through newspaper cuttings, poems, illustrations, tombstone dedications, hand-written letters, maps, penny dreadfuls, acts of parliament...even musical score. It's brilliant, frankly. Part fiction, part fact, the tone and treatment reminds us of Snakes and Ladders by Alan Moore and Eddie Campbell, but with a much more accessible narrative. Smashing as it is, we'd love to see this done as an e-book. The countless different formats would work very well on an iPad.

The Hardy Tree by Iphgenia Baal is available from today from Trolley Books.