It may be a short week for some but there are literally oodles of excellent cabaret this week so with zip, zero and zilch further ado, here are our zingers for this week. 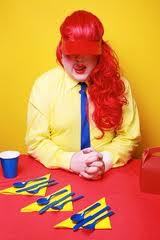 The search for London's top fatty will be spread out over four weeks with three heats and a Grand Final to decide upon London's top fatty. Instead of how they look in swimwear and their hopes for world peace, Burger Queen contestants will be measured on Trend (fat fashion), Taste (their signature dish) and Talent.

Running the rule over the wobbly wannabes will be a high-calibre crew from the worlds of music, cabaret and food including Christopher Biggins, Paloma Faith, Lisa Stansfield, Marina O'Loughlin and La Gateau Chocolat with Madam-Mayoress-of-Camden-And-Plus-Size-Diva Amy Lamé on resident judge duties. Let's hope Amy's New Jersey accent doesn't lead to any problems.

On top of all that, Scottee will be experimenting on himself by trying out a new crash diet each week. "Super Shrink Me", anyone?

Monday's Zingers: Dr Sketchy's Anti-Art School (£10/£8.50) in Kensal Green's Paradise will test if there is still life in your drawing skills.

If you put all your money on Giggs to score on Saturday night (well, he was playing away), you can enjoy the last bank holiday for three months with some free drag queen action from acid-tongued Michael Twaits down at the Cellardoor.

Tuesday's Zingers: UnderConstruction continues at Bistrothesque (£5) with its mission to bring us the best in current and new cabaret. Turn up tonight to see a full bill including cheeky ukulele mistress Tricity Vogue and Northern star Myra Dubois.

SpeechMotion (£5/£4) will be laying down some film and performance in Shoreditch's Horse and Groom.

Wednesday's Zingers: The Ruby Dolls's latest show Rubies In The Attic transfers to the Riverside Studios (£12/£10). Go for the storming musical theatre; stay for the fun and intelligent blend of history, politics and chuckles.

Burlexe at the Shadow Lounge (£20) is an experiment in theatre combining music, award-winning burlesque stars and the talents of popstrel Javine Hylton. Look, it can't be worse than the recent Burlesque film.

There's the cabaret equivalent of open mic going down in Shoreditch's Junction Room. Prepare your heckles and take your place at Scratch Cabaret for a very round price.

EastEnd Cabaret - they're a bit good and (tonight) a lot cheap. See them for free at the Cellardoor.

Thursday's Zingers: In the first of their four shows there, Frisky and Mannish will be at the Udderbelly (£15.50) turning pop inside out (no doubt to check the washing instructions).

Climb aboard for Cheese 'N' Crackers on the Battersea Barge (£7). Unleash your inner Nicole Scherzinger as you try to spot The Next Big Thing amongst ten variety acts all competing for the coveted Cheese & Cracker platter. Expect music, magic, burlesque, cabaret, clowns, stand-up and possibly something to wash your dinner plates in.

At the Bethnal Green Working Men's Club, stand well back as top chap-hopsters The Correspondents will be shaking some serious booty (£8) as part of their pre-festival showcase .

Friday's Zingers: All hail Freaky Friday! No, nothing to do with the 70s role reversal film (or the godawful remake) but Time Out's Friday Freak Show at the Udderbelly (£17.50/£16). There's a stellar cast including ace juggler Mat Ricardo, YouTubetastic Up & Over It and dark-humoured devil Des O'Connor. La Soiree's Miss Behave will be keeping them all in line from 10:45pm.

Patience is not a virtue so why wait until this year's Edinburgh Fringe to see mash-up comedy duo Pistol & Jack's new show Smash*Glam*Sex*Music when you can see it tonight at the Leicester Square Theatre? If you're staying in to wash your hair, you may care to know that you can see the show at the same venue for the next three Fridays. Just saying.

Turn up, tune in, and chill out at the Resistance Gallery's Opium Den (£5) in Bethnal Green. You can lie back and munch on opium tea cupcakes while watching burlesquers Luna Rose, Simi Sumatra and Lydia Darling and listening to accomplished accordionist Tom Baker.

Saturday's Zingers: Tonight's big show can be found at the Relentless Garage where annual cabaretfest London Burlesque Week Encore: Sexy Circus Sideshow (£18.50) makes a return. After last night's late night endeavours, Miss Behave will be fronting another bunch of entertainers; this time, there's a heavy emphasis on the best of international burlesque.

The Magic Circle kick off their Season Of Summer Sorcery (£15), a two-month-long series of shows starting with mind reader and mentalist Graham Jolley.

Sunday's Zingers: There's a pot pourri of performers at Madame Jojo's as the numerous members of this month's Finger In The Pie cabaret (£12/£10) take to the stage. Expect penis poetry, a David Hasslehof impersonator, burlesque, ukelele playing and mind-reading.