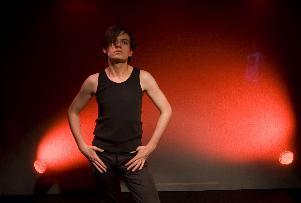 Previously known as the Whitehall Theatre, Trafalgar Studios is hosting Confessions of a Dancewhore, part of Pride 2010. Written and performed by Michael Twaits, the show is a queer cornucopia of cabaret, comedy and commentary exploring the politics of identity.

Twaits knows how to make an entrance as he announces himself to the audience in the persona of Lady M, a foul-mouthed drag queen in a spangly grey tube dress, 36B bra, white stockings and grey boots, savaging Bonnie Tyler’s I Need A Hero while clambering over the seats to introduce herself to the audience. After being warmed up, the audience are lubed up care of some free vodka and tonics as Twaits switches tack to look beneath the bonnet of what it means to be gay.

What could easily have become a pretentious, navel-gazing experience is enlivened by Twaits’ clever use of a blackboard, screen and video projector to create mood, atmosphere and a stand-out piece where he “interviews” a decade-younger projected version of himself. The sound quality was poor in the venue but the to-and-fro between the real, older Twaits and his virtual self felt genuine and insightful.

Twaits shows off his singing skills in a version of “They Had It Coming” from the musical Chicago in which the Tories and those who supported Clause 28 are viciously lambasted. His writing skills come to the fore in an Irvine Welsh-style piece where he describes a night out with his girlfriends and a close encounter with a homophobe. This was followed by a downbeat verbal piece describing a recent break-up.

The encore - a gangbusting poetic retelling of the events of one night in Stonewall, June 1969 - should be retained as a core part of Confessions as it shows off Twaits’ skills as a writer and a performer admirably.

This is a funny and thought-provoking show which highlights the intricacies of the human condition in an entertaining and informative way. We left with the notion that Twaits the performer should share a confessional box with Twaits the writer, the former impressing on the latter the need to cut some of the material (especially the pathos-drenched coda) and drop some of the gimmicks (the drinks were a good touch but broke up the fluidity of the show).

Confessions of a Dancewhore will be at the Trafalgar Studios until Jul 3 2010. Tickets can be purchased here.