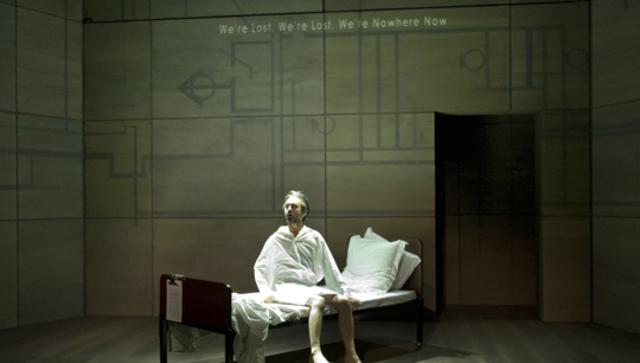 Dan Rebellato's latest comedy Chekhov In Hell has little to do with the Biblical torment or Star Trek. Instead, it asks: what would happen if the renowned 19th-century Russian playwright Anton Chekhov, awake after a century asleep, found himself in modern London? How will he cope with Twitter, Bieber, Gaga and "unexpected item in the checkout area"? In a tale reminiscent of Rip Van Winkle re-written by Sartre, Chekhov patiently explores the city and listens to what comes out of the mouths of babes and bullshitters.

The phrase "those who can, do; those who can't, teach"  doesn't apply to Rebellato (or, indeed, Indiana Jones).  As well as being the Professor of Contemporary Theatre at Royal Holloway (University of London), he is a respected playwright, a regular contributor to the Guardian theatre blog and an artistic associate for Analogue theatre company.  We caught him on press night to ask him some pertinent questions about London and the world of theatre.


Was setting Chekhov in Hell in London a deliberate creative choice or one of convenience?
Actually, I removed most direct references to particular London places from the text because I liked the idea that you could do it in Manchester or Glasgow (or Berlin or Rome...) and it would still make sense. But it does feel like London anyway because of the accents, the types and number of people, the stream of fast-talking self-consciously ‘edgy’ ‘contemporary’ bullshitters. Seeing the production transfer from Plymouth to London has made me very conscious of how those London speech rhythms, that attitude – good and bad – is kind of in my blood; I didn’t realise how much it came from London. Hell, I didn’t realise how much I came from London...

Listening to your louder-mouthed characters, we thought you had a great ear for modern bullshit.  Were any of them based on people you have met?
Well I feel like I’ve seen them all. One or two are taken more directly from particular people; there’s a designer in the play who has a very particular theory of fashion and attitude to women – I met him at a dinner party and he delighted in horrifying us all with his views. I immediately thought he’d be a wonderful stage character. And there’s a scene where an R’n’B star shows Chekhov round her crib. Quite a lot of that is taken from one particular episode of MTV Cribs. I think it was Michelle Williams of Destiny’s Child who showed us round a house she barely seemed to recognise. Plastic over the gym equipment, nothing in the fridge. Amazing, empty wealth.

In your role as a professor of theatre at RHU, have you noticed a smaller number of applicants for next year's drama-related courses at your own university or elsewhere?  What do your current students think of the cuts?
It’s a confused picture at the moment. Applications are holding up okay, a little down maybe; it’s next year that we are waiting for but those students will be applying for places with the fees cap lifted. It’s very hard to tell whether the higher fees will put people off university or whether that will be balanced by not having to pay anything up front. Our students are very angry about the cuts to the arts and humanities teaching budget – especially because Royal Holloway has a particular strength in the arts. Lots of our students were on those marches. And rightly so; the Coalition has made a dreadful mess of their policy. It threatens to do serious damage to one of the great university systems in the world and it will actually cost more money than before over the course of this parliament, probably longer.

Do you have a favourite London theatre?
Well, I have a lot of affection for the Soho Theatre – this is my third play to go on there. But I always enjoy sitting in the Royal Court; it’s an ‘event’ theatre – you never know what story you’re going to be told, the experience you’re going to have. Of the smaller theatres, the Finborough is dynamic and punchy. Of the really big ones, the Coliseum is a sumptuously expansive piece of architecture.

Given legal carte blanche and a million quid, which London public space would you make into a new theatre?
I love the feel of old industrial buildings. You could create a stunning performance space in Abbey Mills Pumping Station, E15. Or Lots Road Power Station in Fulham.

How should theatres encourage more of the public through their doors?  Ticket discounts?  Better advertising?
In the subsidised sector, a lot of tickets are pretty cheap. You can pay more to go to the cinema in Leicester Square than you do at the Court or the National. If we’re heading into a world of increasing private subsidy, I hope we’ll follow the National’s lead and see that money going into reducing ticket prices. Advertising? That’s important, but with our increasing cultural move into web-based media, there’s some uncertainty; in lots of social media – Facebook and Twitter, for example – there’s hostility around the idea of pure self-promotion. To be blunt, most theatres have really boring Twitter accounts. The model needs to change; marketing needs to be interactive, creative, give people something distinctive and valuable in itself. Now I’m sounding like my play’s Internet guru... The most effective way of encouraging people to come to the theatre is to make the best possible kind of work. Tell people stories they don’t know, give us new ways into our lives.

What were your earliest memories of growing up in London?
The thing I remember from the 70s is playing on bomb sites. I grew up in North Lambeth which was pretty heavily bombed and there were still wastelands where bomb-damaged houses had been pulled down but the sites hadn’t yet been developed. These became rubbish dumps. And we used to play there. I remember a day where we looked for televisions  that had been dumped in a big bombsite in Southwark. We would throw bricks through the screens. Those old Cathode Ray Tubes were vacuums, so they made a very satisfying woosh when you smashed the glass.

Finally, you were born in London and you've chosen to work and live in the capital.  What has kept you here?
It’s an endless city. I keep discovering new parts of it, finding out how different parts of it link up. I love how you can turn a corner and suddenly there’s a flash of green or a waterway. I recently cycled the route of the River Wandle from Croydon to Wandsworth, beautiful the way it snakes through the city. And then London has a long memory; in Borough you look one way and you see the ruins of the twelfth-century Winchester Palace, look the other way and there’s the Shard rising up above us, unmistakeably 21st-century. It’s those juxtapositions I love. And the voices, the slang, the mixture of dialects. I love language and in London language is so alive, so funny, so creative, so vivid. Like John Peel said about The Fall: always different, always the same.

Chekhov In Hell continues at the Soho Theatre until 14 May. Tickets and more information here.