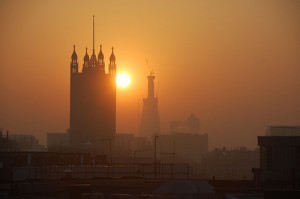 The London congestion charge isn’t showing any evidence of improved air quality, according to a report released by the Health Effects Institute yesterday.

It’s a bit of a blow for the mayor, who has been under fire over air pollution and only last week the International Olympic Committee (IOC) warned that Britain faces fines over air quality in the capital in the run up to 2012, though Boris claims that Europe itself is actually responsible for 75% of London's pollution. Although the c-charge wasn’t introduced with the specific aim of improving air quality, it was probably a reasonable expectation that fewer vehicles = cleaner air. Not so. The HEI study, which was undertaken by researchers at Kings College London, found that attempting to distinguish between air quality in the charging zone and the surrounding areas was actually pretty difficult;

‘Air pollution does not know precise boundaries so any benefit of the CCS or air quality appears to have been lost in the larger regional pollution mix,’ said Dan Greenbaum, president of the HEI.

Not only that, but increased use of diesel-powered vehicles such as taxis and buses within the zone has produced more pollution. In an attempt to combat this unwelcome side effect of the c-charge, TfL will be trialling buses fitted with as yet unspecified ‘equipment’ to tackle NOx and plans to have 300 hybrid buses by 2012. Taxis have also been subject to scrutiny and late last year, Boris Johnson announced that all new taxis would be electric by 2020, though the practicalities behind this grand scheme were questioned at the time.

While the c-charge may not have shown the improvements to air quality that Londoners, not to mention the EU, might have wanted, the launch of the long-delayed phase three of the Low Emission Zone (LEZ) in January 2012 may have some effect, especially as it was at least designed with reducing pollution in the first place.