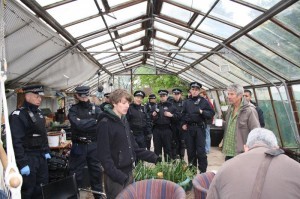 At least two squats - including Rat Star Social Centre in Camberwell and OffMarket in Clapton - as well as Grow Heathrow's market garden area, have been raided by police this morning.

According to journalist Laurie Penny, the Camberwell warrant was to look for stolen goods, yet the officers despatched were from the Territorial Support Group - "London’s first response to any planned or spontaneous events, which may involve public disorder" (this from the Met's website). Arrests have been reported at Camberwell.

OffMarket, which also acts as a library and teaching space, has reopened after the raid. A copy of the warrant is available on IndyMedia, stating the police were looking for evidence linked to disorder from the 26th March protests - given that the police today announced they've charged five more people after the fees protests on 9th December, it's perhaps not surprising they're still chasing up leads from last month.

However, coming today, it's also not surprising that theories are doing the rounds that the raids were done to protect the Royal Wedding - especially when the officers on the ground don't seem to know what exactly they're investigating. Even if there were plans afoot to disrupt Willenkate's Big Day, have the police been watching the news channels? With all the campers hogging the procession route, we reckon protesters would need a medieval catapult to get within paint-chucking distance of anyone vaguely royal.

Update: The Met have issued a statement, saying 19 people have been arrested "on suspicion of abstracting electricity at Camberwell Road", and another arrested in connection with disorder after the TUC March. The bit that makes us shake our heads and mutter "ffs" is the end:

These arrests are part of ongoing proactive work to tackle suspected criminality. They are not specifically related to the Royal Wedding but have been brought forward ahead of the event.

You may have noticed that we originally named some other squats. People have asked us to remove these names - and the public domain tweets we used as a source have also been deleted. Without a source, we look like we're making stuff up so, though we don't like amending our posts unless we've said something factually incorrect or libellous, we've had to take down that information. Sorry.

Photo of police at Grow Heathrow greenhouse from the Transition Heathrow blog.