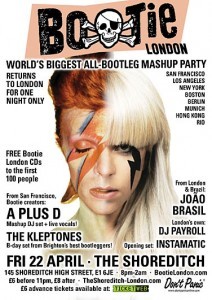 This month Bootie — the all-mashup party from San Francisco — returns to its spiritual home.  For the uninitiated, mashups (also known as bootlegs or bastard pop) take the acapella from one track, the music from another and fuse them to make a new piece of music.

Arguably the first internet-powered music phenomenon, the modern mashup scene was born in London about a decade ago. Hits like M/A/R/R/S' Pump Up The Volume and the Sugababes' Freak Like Me have reached number one, successful sample-based bands include the Go! Team and the Avalanches and last year laptop-wielding megastar Girl Talk released a free-to-download album which "broke the internet".

We take our hats off to the ingenious DJs who somehow dream up killer combinations like Green Day, Oasis, Travis and Eminem, George Bush with John Lennon or, in the suitably named A Stroke Of Genius, The Strokes with Christina Aguilera.

As well as writing their own material with dancefloor fillers like Beethoven's 5th combined Kanye West's Gold Digger, Bootie ringmasters San Francisco DJs Adrian and the Mysterious D (aka A+D) have been responsible for organising mashup parties all over the US with occasional trots around the globe.  On Good Friday, they will be dropping into deepest Hipsterville where they will host and headline a night with London's own DJ Payroll Brighton's The Kleptones (whose album A Night At The HipHopera gives an urban injection to Freddy Mercury &  co.), Fatboy Slim favourite João Brasil plus an opening set from Camden-based mashup podcaster Instamatic of Radio Clash fame.

Tickets (£6 before 11pm, £8 after) are available on the door or online via TicketWeb with a free exclusive Bootie London mashup CD to the first 100 people through the door.  To get you in the mood, here's a sublime combination of Iron Maiden and The Monkees titled Trooper Believer.

Looking for live music inspiration? Check out our weekly recommendations.