How Many Nipples Are There In The National Gallery?

By M@ Last edited 69 months ago
M@ How Many Nipples Are There In The National Gallery?

In 2011, we undertook a faux-scientific study to count and categorise all the rude bits in the National Gallery.

We counted the total number of nipples and genitalia (both female and male) currently on display in works of art at The National Gallery in London. The results, broken down by period and nationality, offer insights into bodily attitudes among different territories.

The National Gallery's web site was used, rather than direct inspection. Each painting was scrutinised for the number of (a) female nipples, (b) male nipples, (c) female 'areas' and (d) male 'areas'.

Excluded from the count:
(1) Anatomy belonging to cupids, putti, satyrs, maenads, fauns or any other creature of myth (see *below for note on Christ).
(2) Anatomy belonging to children.
(3) Male or female 'areas' hinted at only by a bulge or dip in cloth.
(4) Anatomy too small or shaded to be immediately recognisable.
(5) Paintings not on show in the main galleries. Specifically, rooms 5 and 10 were closed during the study, and we have not included the large collection from Level 0, which is only occasionally open or of temporary display.

*Authorities disagree on the nature of Christ. Some hold that he was God in human form, some that he was both God and human simultaneously; others that he was simply a carpenter whose antics were blown out of proportion. For the purposes of this study, we have classified Christ as human, and include his anatomy in the following counts.

Note: In the interests of open research, all data are provided in the attached spreadsheet. Click here.

The total counts were as follows:

Giving a total rude-parts count of 274. (We understand that male nipples are, in most cultures, less rude than other anatomical parts listed here, but we include them for the sake of gender balance.)

We can break down these results by nationality. Figure 1 takes the total number of rude elements from a given region and divides by the number of paintings from that region; hence we determine the percentage of works from a territory that contain a nipple or genital element.

*Note: For Figure 1, paintings were counted by room. Those few rooms with mixed nationality were excluded. See attached spreadsheet for more detail.Clearly, Flemish paintings have the highest rate of rudeness — almost 80% contain some form of human exposure. By contrast, not a single painting from Britain presents nudity*.

While clear, Figure 1 distorts the picture somewhat. The swollen Flemish rating pertains to just 39 paintings, whereas the Italian average is based on over 500.

We can, instead, depict the figures as a percentage of the total. That is, of all the rude elements in the whole gallery, what percentage are French, Italian, etc. (Figure 2). 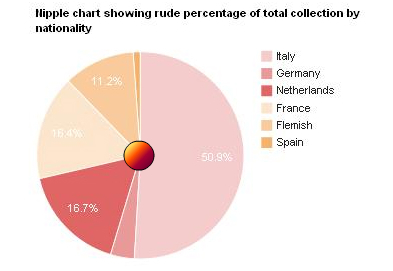 Here, we see a clear preference for anatomical exposure in Italian art. Over half the instances of dishabille are from Italian artists, with French and Dutch artists jostling for second place.

The apparent Italian fondness for the undraped form has two main origins here. First, the National Gallery has far more Italian paintings than from any other region; second, the count is skewed by the large number of male nipples contributed by the crucified or risen Christ, popular subjects among the early paintings in the Sainsbury Wing, most of which are Italian.

Finally, the smuttiest room in the whole gallery is Room 29, which contains 22 female nipples, 5 male nipples, and 3 women's 'areas'. The room contains examples of work by noted nudist Peter Paul Rubens (e.g. Figure 3). Those of a more delicate nature may prefer the eastern wings of the gallery, where many rooms of British and French paintings, plus landscape-heavy Canalettos are completely free of teat and pudenda.

The results show that Flemish painting, as typified by Rubens, are the most nudish in European art collected by the National Gallery. However, other regions, most notably the Italian peninsula contribute a greater overall number. 274 examples of exposure can be found around the gallery, with men and women almost equally outgoing.

While our count included over 1000 works of art, the sample remains tiny compared to the entire corpus of European art in galleries around the world. We would encourage further investigations into other national, private and regional galleries to build up a greater pool of data.

A very different picture might emerge if the study had excluded male nipples and, in particular, the singular contribution from Jesus Christ.

Future researchers might also care to examine the ubiquity of buttocks and suggestive cleavage in western art. A comparative study of anatomical depiction among art traditions of different ethnicity would also be of interest