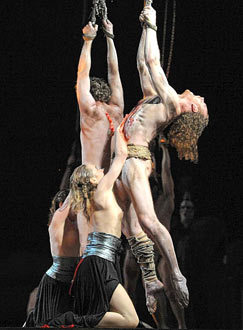 Tuesday morning 11am and Londonist is royally chuffed to be invited to put its feet up in the Director’s box at Covent Garden for dress rehearsal of the David McVicar Aida which opens on Friday.  Apart from the close-up view of the singers’ facial expressions and a position right over the pit where we can eyeball Fabio Luisi spurring the orchestra to a spanking pace, we are captivated by brilliance of both staging and movement.

In a brief chat after the performance, associate director Leah Hausman points out that Verdi was writing a serious piece about war: the word ‘guerra’ appears a hundred times more often than ‘amore’ in the libretto, so this is a story of war in which love happens, rather than the other way round.

It looks like Coriolanus but feels suddenly relevant: Amneris condemns the priests as controllers of a rotten society, Radames as head of the army is called upon to save the nation for posterity amid popular chanting and a march of bloodied and butchered foot-soldiers.  It could be played out in Tahrir Square.

The grandiose set-pieces are so much more than parades: there’s a fantastic troupe of athletic bare-breasted women whose urgent runs and synchronized thrusting seem lifted from a Soviet spartakiade, there’s ritual disembowelling and corpses dangle from the rafters.  Their male counterparts stage Kendo-inspired sword and lance fights in a dance of death under David Greeves’ genius martial arts coaching.

It’s no-one’s fault but Verdi’s that Aida shoots its load in the first two acts and what remains after the interval is the afterglow of the doomed romance between Radames and Aida, and Amneris’s slow-burning disappointment. But this is where the production really delivers as the emotional triangle is explored in scenes of tender and realistic intimacy, due to the powerful collaboration of the three principals: Roberto Alagna, Olga Borodina and Micaela Carosi whose acting is every bit the equal of their sung performances.

It’s edgy casting: Alagna was booed at La Scala in the same role in 2006, Olga Borodina famously walked out of an earlier Covent Garden Aida in a disagreement with ROH music director Antonio Pappano, so it’s a miracle not just that they are both here but that they conspire with Carosi to create such chemistry.

We went backstage for the scene change and some gossip: Swan Lake has had a box office mega-surge due to the ‘Black Swan’ effect with phone calls asking when Natalie Portman would be ‘on’.  The box office has a sense of humour because they’re tempted to answer ‘every other night alternating with Billy Elliott’.  But the best news is that ROH is trying to reprise its sensational Anna Nicole in 2013, and working on available dates with Eva-Maria Westbroek.

A few tickets are available for the 6 performances from Friday March 11th.  www.roh.org is your best source.

Dress Rehearsals are fully staged performances and seats are offered to ‘Friends’ of Covent Garden: annual subscription £79 which also gives early access to the lowest-priced tickets which are often sold-out before they go on public sale.