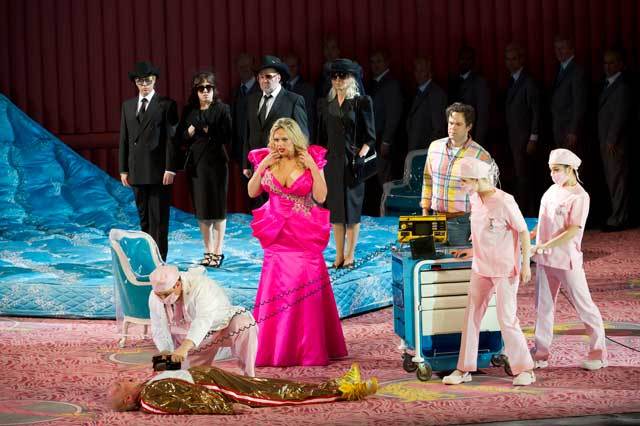 Knowing it's both a gamble and a headline grabber, the Royal Opera House have gone all out for Anna Nicole. Not only have they rigged up a special pink curtain with a customised coat of arms but her face adorns every cupid in the auditorium, every costume dummy on show and is plastered across all walls. In the total Anna-nization of the 'House the missed trick is an interval quiz posing the question, "how many different words for breasts did Richard Thomas squeeze into the libretto?"

This Anna Nicole is a sweet dumb blonde deceived by the American Dream. A foolhardy early marriage leaves her a single mom with no prospects. Dreaming of Marilyn Monroe, she escapes hicksville for the city where her options are living death working in Walmart or quick bucks in a lap dancing joint. Turns out she's rubbish at the latter until she's persuaded to invest in a pair of silicone F cups and a lifetime of back pain. Soon octogenarian billionaire J. Howard Marshall descends from heaven in a stairlift to trade off some late life fun and blow jobs for Anna's meringue wedding, a party lifestyle and a ranch. To summarise an infamous story, death, drugs, sex, death, sex, drugs and death follow, all captured on the ever present cameras of the paps and TV crews.

From the get go, this is a slick and smart production. Anna Nicole's true life rags to riches - and as yet, unfinished - story is by turn comic, tragic and farcical. Turnage's heavy orchestral score matches Thomas' "extreme language" libretto for power. Surtitles make every expletive crystal clear above the boom of the fabulous orchestra and help underline the cleverer elements with a smattering of sacred refrains reappropriated to emphasise Anna's rise and fall in the presence of a Greek chorus, comprised of TV reporters.

Eva-Maria Westbroek endears Anna-Nicole to us with wide eyes, turning her gorgeous soprano to sweet baby tones charming Marshall and defying her bloated, ruined, drug-addled suicide with a heart wrenching and dignified exit. Tenor, Alan Oke makes a superb sprightly and steely geriatric and the teeth on Gerald Finley, as the lawyer Stern, flash as brilliantly as his oily, money making turn. Watch out for unexpected emotional moments in the presence of Anna Nicole's mother, Virgie, played with grace and class by Susan Bickley.

You'll not leave Covent Garden whistling the tunes but Anna Nicole will stay with you long after.

Anna Nicole will be performed on Saturday 26 February, Tuesday 1 and Friday 4 March at the Royal Opera House, Covent Garden at 7.30pm. Tickets from £4.