What To Do With Five Closed Lewisham Libraries? 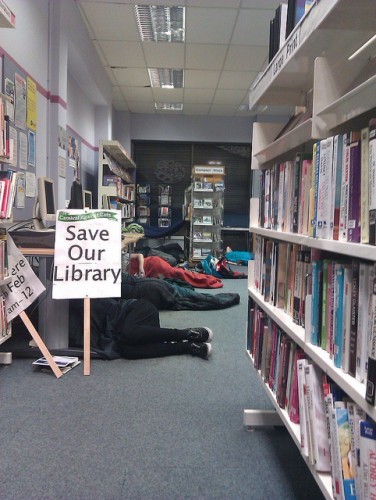 The day of protests to save our libraries had a lot of support, but Lewisham Council are already well into planning what to do with the five libraries they have earmarked for closure. New Cross, Blackheath Village, Crofton Park, Sydenham and Grove Park libraries are all set to close on 28 May to save money following slashed government grants to local councils.

The Sydenham Society has published the relevant section of a council report from last week. Despite extremely strong feedback from public consultations and petitions carrying over 16,000 signatures, Lewisham thinks it has two options: to maintain the current number of libraries with reduced staff — and therefore reduced hours — or to reduce staff, close the five libraries and hope other bidders come in to run 'community libraries' to replace them. How very Big Society.

A look at the report gives some clues as to why Lewisham are taking this option. The borough's libraries have been allowed to get into a terrible state. A programme of repairs was underway (Torridon library is currently clothed in scaffolding), but those works not already in progress are now too expensive.

It's estimated that to repair the roof and electrical systems at Crofton Park would cost £200k, to sort out the pre-fab Grove Park would cost £230k and fix the leaking roof and rotting timbers at Sydenham would cost £250k. No wonder the Council wants shot of them, their attempts at playing catch-up on repairs have been too little too late to save these buildings. But it also begs the question: who on earth is going to take them on?

Answer: quite a lot of people, actually. Expressions of interest in the buildings have been received from 13 parties, including an IT recycling and refurbishment company, a GP surgery, a handful of charities proposing community centres, a PFI company and a faith group. The Lewisham Anti Cuts blog has a rundown if you don't want to wade through the PDF report.

Some of these groups have promised to preserve some kind of library provision, though looking at some of the bids the available space will be tiny. We'd also be interested to see what kind of level of service and neutrality they would have to provide (for instance: how easy will it be to get hold of a copy of The God Delusion from a faith group-run library?).

Some other interesting points. Blackheath Village library currently costs £73.12 per opening hour to run each year, compared to £41.80 for the massive central Lewisham library and £8.82 at Manor Park. This is largely down to an incredibly costly lease signed in 2008 and due to run until 2013, which may not even be possible to pass on to a third party. The library service itself might end up at the Reminiscence Centre; who knows what will happen to the building, or how much it might cost to mothball.

Also, in a kick in the nuts for the Big Society, of the Lewisham residents who answered the online survey Our Lewisham, Our Say (who we suspect, given that they took the time to complete something that was a giant faff, are probably already concerned and committed citizens), just 10% said they'd be willing to help out themselves in order to keep a library open. This is what the Big Society looks like: 'integrated community hubs' with a few shelves of books on the side.