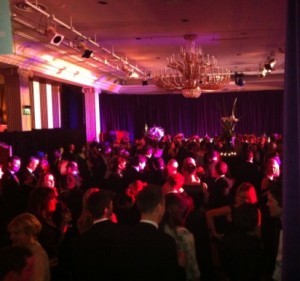 Last Sunday night, Londonist was lucky enough to be invited to the BAFTA after-party by sponsors Grey Goose Vodka. Held in the not so modest surrounds of Grosvenor House Hotel’s Great Room and Ballroom, the party brought together big names from either side of the lens and either side of the Atlantic to celebrate well into the early hours.

As well as spotting Gemma Arterton, Helena Bonham Carter (whose speech was talk of the night) and the very in demand Colin Firth, we managed to manhandle a BAFTA, and learned that winners were warned that the gold faces were chipped and had built-in GPS, just in case anyone was tempted by Ebay.

Amidst the glitz, glamour and “Who’s that? They look familiar?”, Grey Goose was keen to show off the star status of their vodka, which is uniquely distilled in Cognac using premium French wheat. The team had put together specially made drinks for the night, each themed to nominated films, which added a little extra fun to the already thoroughly enjoyable process of drinking them.

The Speechless cocktail was named after The King’s Speech, rather than being an ironic dig at talkative Helena Bonham Carter.  The drink was inspired by King George VI’s reign, and is a twist on the classic Vesper martini cocktail, with orange bitters, lemon zest, vermouth, gin and Grey Goose vodka. 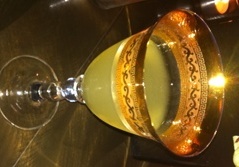 Pas de Deux, a dark burgundy coloured drink made from Grey Goose Le Citron, violet liquor, lychee juice and blackberry puree came garnished with a delicate feather, a representation of the “innocence and grace of the white swan” against the backdrop of the Black Swan.

The Social Status cocktail was created in honour of The Social Network, and featured lime juice, soda water and elderflower cordial as an ensemble cast alongside the vodka in leading role. It had a lot more complexity and was much more refreshing than the extended filmic metaphor used to describe it. Sorry.

For a proper taste of the A-list, or at least what they drank on the night, you can download the full list and recipes for the six BAFTA cocktails on the Grey Goose website. Paparazzi not included.