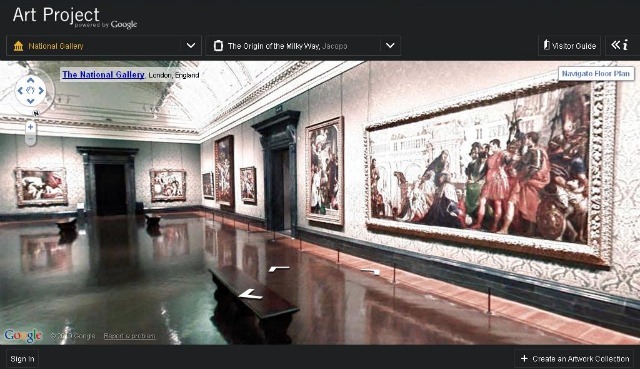 A new website lets you wander around the world's great galleries using the Google Street View interface. Featured venues include the National Gallery and Tate Britain.

Most gallery web sites let you examine and zoom in on their key exhibits, but few let you 'wander' from room to room, getting a sense of how the works are displayed.

The Google Art Project lets you do just this. While it's no match for a real visit, you get to explore the galleries without being buffeted by school groups and tourists. On the down side, this also means you can't listen in on the conversations of art pseuds, surely one of the more entertaining attractions of a gallery visit.

Once you've found a painting you like, the familiar Street View controls let you zoom in to impressive levels of detail. Each painting comes with copious historical notes. You can even play billionaire and build up a collection of your favourite masterpieces from across the world.

The National Gallery experience is limited to eight rooms at the western end. That's probably enough for most people (and includes plenty of Renaissance greats), but cuts off the ever-popular impressionists, Canalettos and British art down the eastern side. Shame, as these are usually the most crowded areas.

Tate Britain also offers eight rooms. These are spread throughout the gallery, so you can't wander between rooms as naturally as in the National. Coverage includes the huge Room 9, the Tudor portraits, part of the Turner collection and (an odd choice) the Millbank Entrance space. The interface is already something of an historical artefact, given that most of the paintings have shifted location in the Tate's ongoing rehang.

Sick of London's galleries? There are 15 others to choose from including the Hermitage, Palace of Versailles and MoMA.

Anyhow, go have a play.