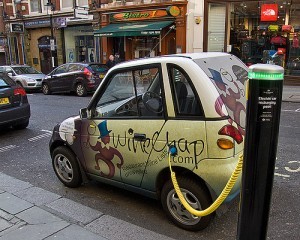 Boris Johnson’s much-vaunted electric car scheme is turning out to be something of a damp squib, according to the Green Party.

Back in 2009, the mayor had big plans for London going electric with a promise of 100,000 cars and 25,000 charging points, but it’s all gone a bit quiet since he was forced to scale back on the scheme when the £20m he pledged plummeted to £7m after his spending review last November. The latest announcement that the target of 7500 charging points by February 2013 will now be 1300 has made the Green Party see red and they have accused him of failing to deliver on his promises.

‘He failed to secure the Nissan/Leaf sponsorship deal for the Olympics which media reports claim would have seen an all electric fleet. He has also failed to guarantee that these charging points will run on renewable energy, so the environmental gains are far less than they should be,’ said the Green Party’s Darren Johnson yesterday.

The BBC’s recent test drive of an electric Mini from London to Edinburgh highlighted a lack of charging points, but has been criticised by the electric car industry as ‘unrepresentative of the experiences of most EV drivers’.

With an impending decision from the European Commission over London’s air quality, Boris looks like he could be set to face more criticism over his commitment to making transport cleaner.