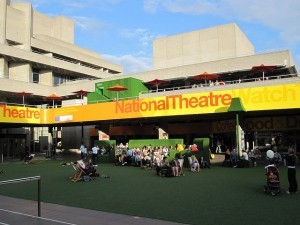 A musical by singer-songwriter Tori Amos, a new play by Mike Leigh, and Simon Russell Beale playing Stalin are all part of the National Theatre's plans for next year.

Sadly, we're not coming to you with details of a new show called Cornflake Girl: The Musical. Amos has written music and lyrics for a play based on The Light Princess, a fairytale by the 19th-century Scottish writer George MacDonald. It'll be staged in early 2012, directed by Marianne Elliott.

As usual, the details of Mike Leigh's new play remain a secret to everyone but the playwright-director and his cast. All we know is, it'll open in September. Nicholas Hytner, artistic director of the National says, "I have absolutely no idea what it's about. I expect I'll find out at the first preview."

And Simon Russell Beale fans are in for a treat: he'll play the Soviet dictator in Collaborators, the debut play by Trainspotting and Shallow Grave writer John Hodge. The script, which imagines a meeting between Stalin and playwright Mikhail Bulgakov, was sent to the National on spec. Hytner describes it as "wickedly funny"; but we'll have to wait until October to find out just how wicked and how funny.

Other season highlights for the National include A Comedy of Errors, directed as a Christmassy Shakespeare show for all the family by Dominic Cooke from the Royal Court; a new documentary musical called London Road; and a new version of Carlo Goldoni's A Servant With Two Masters, starring James Corden. The latter play has been updated by Richard Bean, moved to 1960s Brighton, and renamed One Man, Two Guvnors.

There's one slice of sad news in this otherwise exciting theatrical pie: those of us used to enjoying the Travelex £10 tickets for seats in the Olivier will have to scratch around the back of the sofa for another couple of quid. The new £12 price tag is a rise just under inflation, and as Hytner points out, "it's cheaper than a seat at a West End cinema."

For more information on the National Theatre, visit www.nationaltheatre.org.uk.