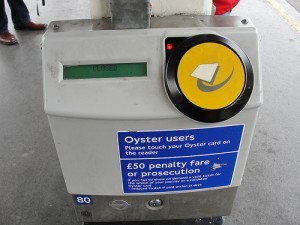 It’s not been a great month for rail commuters – we’ve had tube fare rises, rail fare increases and now fines for not touching in or out out with Oyster are up to £6.50.

Sure, we’ve all forgotten to touch out now and again, especially on lines like the DLR where you don’t always have to go through a barrier and we know it’s our own stupid fault, but what happens when the barriers aren’t working, or they’re open, or simply not there? Commuters going through Stratford between the National Rail platforms and the Jubilee line last summer may remember the palava that ensued when all the Oyster card readers were removed from the concourse, meaning that anyone coming off National Rail was forced to climb the stairs to touch in on the other side of the station before going back to the Jubilee line platform.

TfL say that National Rail companies are failing to install barriers at many stations while the companies themselves say they will only install barriers where it represents ‘value for money’ but since they get to keep the fine incurred, it obviously works in their interest not to install them and rely on readers.

London TravelWatch say that Oyster users should always contact the Oyster helpline if they believe they’ve been incorrectly charged, but in practice it’s not quite that easy. Having been incorrectly fined after touching out at a non-functional barrier at Canary Wharf only a couple of weeks after being again incorrectly fined when a member of TfL staff let us back through the gate when a line suspension occurred while waiting on the platform, we found the Oyster helpline less then, well, helpful. The first refund was given with surprising ease, but the second request was more troublesome, with the operator informing us that they ‘only ever give us the benefit of the doubt and refund once’. Leaving aside the implication that they appear to consider more than one refund request inherently dishonest, this fails to account for barriers which as mentioned before, don’t work, are open or missing.

Still, the sobering thought that last year penalty charges for failing to touch in or out were in excess of £56m - which is quite a jump on 2008’s £32m – is enough to make us double check the rules.

Have you been hit with an incorrect penalty fare? Did you claim a refund? Tell us in the comments.