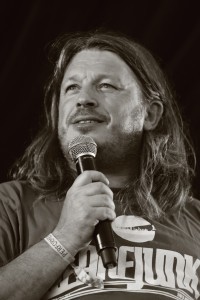 Five comics took to the somewhat impersonal stage of the British Library's Conference Centre last night to kick off the BL's examination of comedy, part of their Evolving English exhibition.

Doc Brown, rapper/performance poet-turned comedian was our host for the evening, chatting amiably with the crowd and injecting some warmth into the freezing room. Geniality is a quality much looked for in a compere but more likely to get a comic savaged; however, from the flashes of acerbic come-backs and excellent rap about police stop and search, we suspect his show (starting tonight at the Soho Theatre) will be worth catching.

Susan Murray ran with the subject of linguistics and accent with some very witty one-liners, and handled the poisoned chalice of being first on with plenty of audience chatter. Comedy Grand Master Arthur Smith followed, leading a rousing chorus of "I am the Mayor of Balham / oh yes I fucking am / I am the Mayor of Balham / I fucking fucking am", the like of which we feel confident in stating has never been witnessed before within the sainted walls of the British Library, and never will be again.

Here, we skip protocol and jump directly to the final act and, in doing so, ask: why is Richard Herring not on TV? His old sparring partner Stewart Lee has convinced programmers that there is a call for this kind of wonderfully intelligent, thought-provoking comedy on the box. Why hasn't, say, Channel 4 brought Herring in to prove they can do anything BBC2 can do? Anyway. Herring is, as we keep telling you, hilarious even when mining his vast repertoire for theme-appropriate routines, rather than doing a full show. It takes a consummate professional to properly provoke belly laughs during one of these little segments. Telly. Seriously.

But our final word has to be about Ida Barr. Creation of Chris Green, this hip-hopping former Music Hall star, resplendent in Edwardian cream silk and lace, doddering around the stage yet still capable of throwing some shapes, innit, was a revelation. Sure, we were aware of Ida and her bingo nights during the Udderbelly Festivals, but nothing - nothing - prepared us for the sheer brilliance of the concept and execution. The singalong medley of If You Were the Only Girl in the World and Rihanna's Only Girl was worth the entrance fee in itself. We'll be keeping tabs on this old timer.

Sadly we can't promise you Ida Barr tonight, when the conference comes to a close (fancy the conference itself? Tough, you've missed it), but you can see Shazia Mirza and Londonist fave Robin Ince. There, that's just as good, isn't it?