Weekend Protests Against The Cuts: Not Just Topshop 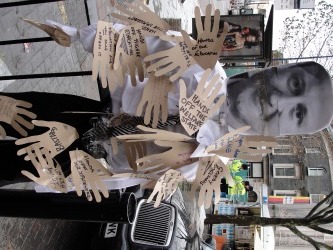 There were more protests against government cuts yesterday, with UK Uncut action all over the country targeted at Sir Philip Green. The retail magnate is not, actually, a retail magnate - officially his wife owns the Arcadia group that covers Topshop, BHS, Dorothy Perkins and Miss Selfridge, and because Mrs Green is resident in Monaco, the UK missed out on about £300m tax on a company dividend of over a billion pounds.

This is completely legal, but protesters say that when the country is facing massive cuts to public services, tax avoidance on such a scale is immoral. Friend of Londonist, Chris Coltrane, was one of the people who headed down to Oxford Circus yesterday morning:

"The Tories say there's no alternative to the cuts. They say we're all in this together. They also let corporations and multi-millionaires dodge billions of pounds in tax every year. Tax avoidance, tax evasion and tax "efficiency" costs us £70 billion a year. That's £70,000,000,000. To call this outrageous is the understatement of the millennium. That's why on Saturday, hundreds of us took non-violent direct action on Oxford Street against the worst offenders.

We met at Topshop, and at 11.02am, on the whistle, we sat down, blocked the entrance, and completely shut down the store for the morning. We then moved onto BHS, Boots, Dorothy Perkins, Miss Selfridge and Vodafone. In one day, we forced each store to close. By taking action on one of London's busiest streets, we sent a clear message to the rich: we won't let you get away with dodging your fair share of tax.

The reaction from shoppers was overwhelmingly positive. Many of them were horrified to learn not only that the rich avoided tax, but that they did it on such a monumental scale. People were hungry for information; we exhausted our entire leaflet supply within half an hour. Some passers by even joined us with the the sit-in. We were touched by the constant stream of gifts from shoppers with kind hearts. People bought us pizza, coffee and snacks by the crateload.

The protest was more popular, more well received, and more widely covered than we could ever have hoped for. And we're not done yet. As the protesters sang in high spirits throughout the day: "If you don't pay your tax we'll shut you down!""

There were also protests in Lewisham town centre, with a couple of hours petition gathering marred by four policemen trying to get a name and address out of one of the leafleters "the easy way or the hard way" following Monday's demonstration at Lewisham Town Hall. Protesters then targeted Lewisham's Boots, pointing out that they now pay £110m a year less in tax by registering their HQ in Switzerland.

There's also a weekend of devising creative methods of protest at Goldsmiths, facing a 20% budget cut as the government focuses funding on subjects like medicine, science and languages - even though the Creative Industries are currently growing at about twice the rate of the general economy. Anyone concerned about arts funding can pop along, there's workshops and film screenings, how-tos and skills sharing.

Photo of Cameron in effigy at Lewisham by the author