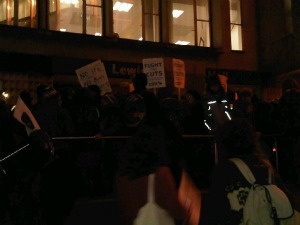 There was a large protest outside Lewisham Town Hall last night, as the Council voted on the first wave of an estimated £60m worth of cuts to borough services. Part of the crowd rushed the Catford building in an attempt to get inside to voice their opinion of the proposals, only to be met by riot police on the steps (see videos below).

Several people were arrested as local police called in the Territorial Support Group for reinforcement. The Council only allowed 40 people inside to attend the meeting and hadn't set up their usual videolink room, leaving the 200-300 strong crowd outside chanting "Let us in". Protester numbers were swollen by a group who had marched down from Goldsmiths College.

Former Green party councillor Sue Luxton reported a smoke flare let off inside the council chamber and Catford Road cordoned off, but also that protesters started litter picking outside the town hall.

Lewisham's cuts target council jobs in social care for vulnerable people, children's and young people's social services, and cuts in funding to services like meals on wheels (meaning charges will increase). The excellent Hangbitch has been following the story and has suggestions from Lewisham residents about how to spread the burden of the cuts more fairly, like clamping down on PFI bureaucracy rather than slashing library services.

We think the main problem with council cuts is that while we can argue over which services should be cut - and please do, in the comments - the directive to slash costs comes from central government. Councils are being given no choice but to make unpopular decisions.

Mayor Steve Bullock and the Lewisham Labour party seems to have adopted their role as grim-faced axe-wielders with particular gusto, however. The final amount of Lewisham borough's central grant hasn't been announced yet, but the cuts are steaming ahead. The bizarre political nature of the situation in Lewisham can be seen in the voting from last night to pass the cuts package: 36 Labour councillors for, 3 Tories and Green against, 11 Lib Dem abstain.