Student Protests: The Days Ahead

By Londonist Last edited 137 months ago
Londonist Student Protests: The Days Ahead 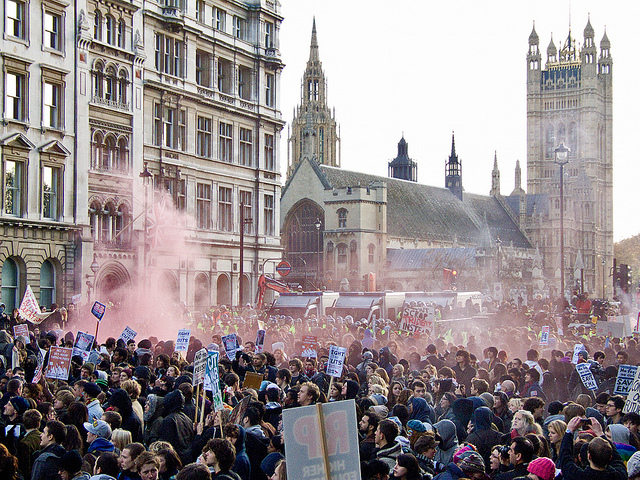 The students' movement against education cuts and increased tuition fees will be back on the streets of London this week as Parliament prepares to vote on fees this Thursday.

The government is attempting to shore up its parliamentary support and stabilise the rocky coalition ahead of Thursday's vote; divisions between and within the parties over the higher education funding proposals are threatening the Coalition.

Student leaders and activists are preparing to turn up the heat on the Government with a series of protests and rallies planned across the country on Wednesday and Thursday.

Here in London, the NUS's national day of action on Wednesday should see protests, rallies and teach-ins at university and college campuses across the city; in particular, campuses where student occupations continue. Ongoing occupations in London include UCL, KCL, UEL, SOAS, LSE, Goldsmiths, Camberwell College of Arts and London Met Uni. Organisers also hope for protests at FE and sixth-form colleges and schools.

On Thursday a national protest organised by ULU, the Education Activist Network and the National Campaign Against Fees and Cuts will march at midday from ULU, Malet St to Parliament.

From 1pm an NUS-organised lobby of MPs at Parliament is due to go on until 3pm when an NUS candle-lit vigil will take place at Victoria Embankment.

Police are expecting 30,000 to 40,000 protesters but student activists are organising for more than the 50,000 who protested on November 10th, when protesters besieged and occupied the Tory party HQ at Millbank.

On Monday evening more than 100 arts students from various London university occupations disrupted the Turner Prize ceremony at Tate Britain. Protesters managed to get into the hall where the ceremony was taking place, chanting anti-cuts slogans and disrupting speeches. Turner Prize winner Susan Philipsz used part of her acceptance speech to support the protesters saying, “I support artists against the cuts. Art should continue to be accessible to all no matter where you live or indeed whatever your wealth.”

Culture minister Ed Vaizey told the Guardian: "They have every democratic right to protest. I just wish they'd do some work."

By Neil Roberts. Image by Chrisjohnbeckett in the Londonist Flickr pool.