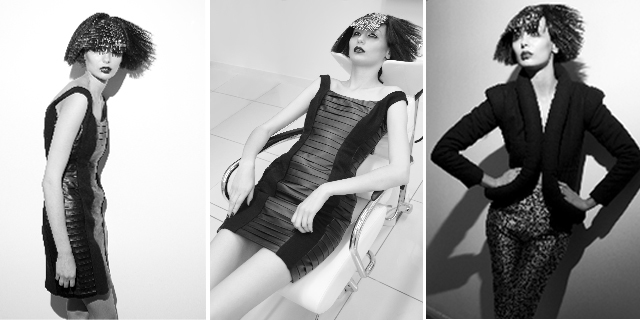 London's taste for the eclectic and avant-garde keeps it firmly at the frontiers of fashion creating a fertile environment from which an abundance of new designers can emerge. The energy and diversity of the city has been a constant source of inspiration for generations of London-based designers and anyone interested in fashion. This series of STYLEist celebrates the amazing talents of the capital's up and coming style-setters.

Gabriella and three friends set up their own label - 4.2morrow in 2009 after they'd graduated from their BA HONS in Fashion at Hertfordshire University and realised how few jobs were around. Gabriella is chief designer for 4.2morrow and the collections have since been showcased at London Fashion Week, Alternative fashion week, London edge and I love runway. In addition the collections have also been featured in magazines such as Qlix, Masquarade and Disorder magazine to name a few. In 2010 we released our debut T shirt range inspired by Tattoos.

4.2morrow is about not being afraid to be different.The Brand Is dark, edgy and takes a lot of inspiration from rock music and gothic Art.

What does fashion mean to you?

Fashion is about breaking the rules, not conforming to 'normal' standards. On a personal note, for me it's about being unique and not being afraid to be different.

Who epitomises London Fashion for you?

The individuality of people I see in the streets.

How has London inspired you or your designs?

London plays strong influence on me, through historical architecture to contemporary artists. Furthermore, Camden influences my dark side.

Where do you hang out?

Pretty much in Camden and rock gigs.

What's the worst outfit you've seen someone wearing on the tube?

There have been many..... it's too hard to pinpoint one!

What was the first thing you designed?

Mmm... I think the first thing I designed was probably a pair of shoes!! it was a long time ago!!

Which designers inspire you?

Gareth Pugh inspires me, as does Graeme Armour, Alexander Mcqueen, Ann Demeulemeester and Haider Ackerman to name a few!

Where can we buy your clothes?

You can buy the tee shirt range from Rag and Magpie and also from our online store 4.2morrow we are adding new lines very soon