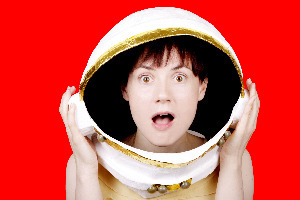 The Fortean Times and its semi-regular conference, the UnConvention, which gathered at the University of Westminster on 23rd-24th October, occupies the middle ground in the world of paranormal events.

The UnCon had talks on UFOs, poltergeists, crypto-zoology and other curious cultural ephemera. Whilst forteans have a deep knowledge and interest in the paranormal they raise an eyebrow at the dismissive ways of the skeptics, whilst also casting a critical eye over the orb-infested, demon-haunted world of the believers. Forteans know that weird things happen, or people say that weird things happen, and inquire from there without, hopefully, too many preconceptions on either side of the believer or skeptic axis.

Ian Ridpath and David Clarke both meticulously deconstructed the facts and mythology around the Rendlesham Forest UFO Incident, followed by a panel discussion that deconstructed Nick Pope, former MOD UFO export and now, according to panel member and noted UFO wag Peter Brooke-Smith, “consultant to the Murdoch empire on Chinese lanterns”. In both cases Rendlesham and the Berwyn Mountain Crash case discussed by Andy Roberts began with confusion and have evolved into mythology and nonsense. It seems that Roberts, Clarke and Ridpath have attempted to cut through that to the truth, leaving others to follow the myths.

The scheduled ‘UFOs and Climate Change’ talk by Ian Simmons morphed into a talk on bizarre taxidermy, inspired by the recent gathering of the Walter Potter stuffed animal diaspora at the Museum of Everything. It was a concise talk, as cheery as was decent for a talk about an art form that started out being made out of bits of dead babies before moving on to drowned kittens and shot squirrels.

Crypto-zoology was covered with talks on the Blue Dogs of Texas and Big Cats in Australia which was “brilliant” according to one attendee. Richard Freeman revealed that, in his search for the Orang-Pendek, a possible Sumatran ape-man, he discovered some hair that was revealed by DNA testing to be a possible new species of Orang-utan. How humanoid it turns out to be remains to be seen.

Could the ‘bosom serpent’ be regarded as crypto-zoological? The long-held belief in snakes and toads living inside people was covered by Jan Bondeson with his usual vigour and dark wit. These infernal, internal beasties only dissolved from conventional medicine in the late eighteenth and nineteenth century. Bondeson is an expert in exploring the bizarre byways of history and his second talk for the UnConvention covered the adventures of the ‘Boy Jones’: an odd-looking, rookery dwelling boy who was captured inside Buckingham Palace three times before being press-ganged into the navy to keep him out of trouble.

Poltergeists got two look-ins including the Ghost Club’s Alan Mudie speaking on ‘Sex and the Poltergeist’, not a review of unpleasant eighties horror film ‘The Entity’, but a look at the idea of how sexual frustration and/or trauma could manifest itself in psychic plate smashing and other supernatural violence. It raised some interesting points on the old idea that poltergeists are a psycho-kinetic rather than ghostly phenomena.

Not that there was any danger of that. It's not that forteans, as far as we know, are more highly sexed than others, but the regular ‘Paranormal Olympics’ brought in the result that the Fortean Times crowd were slightly less psychic that chance would suggest.

Comedian Helen Keen was an Unconvention first-timer with her history of space flight routine ‘It Is Rocket Science’. She handled it well when, upon describing American rocket pioneer Jack Parsons as a ‘satanist’ a member of the audiance corrected her with a cough and saying ‘I think you’ll find he was a thelamite’. This, and the transition in pace from lectures to stand-up comedy, held her back for a short while but she blasted through with a routine that was funny, bright, brilliant and had just the right weight of pathos for the lost age of space pioneers.

Helen was also corrected in show, by a member of the audience (the one she's nominated to be Patrick Moore for her set no less) for her pronunciation of Russian rocket Pioneer Konstantin Tsiolkovsky. It did turn out that 'Patrick' himself had confused Tsiolkovsky with the father of Russian aerodynamics Zhukovsky as ‘Patrick’ emailed Helen about afterwards. (Though he’s probably not feeling as sheepishly as your reviewer who confused his Russian in this review and mistakenly wrote that the mispronunciation was of the cosmonaut Alexei Leonov.) Still, there’s no audience like an UnConvention audience like no audience we know...

Other talks included a ‘Magical Mindscapes’ mega-mix of Paul Devereux’s previous talks on landscape, sound, shamanism and much more, Gail-Nina Anderson’s talk on a vampire rabbit statue talk that meandered toward the mythology of the (supposed) goddess Oestra, Jeremy Harte’s ‘hilarious and informative’ talk on headless spectres, the visual geek-gasm that was Doctor Who writer Paul Cornell summing up forteana as represented in the show and a musical exploration of broadside ballads that included such wonders as the description of the size of a whale’s ‘cods’ and maid’s lament in the want of a ‘dil doul’. British mass media at it’s finest.

An intoxicating world to step into even before the pub opened. There were a few niggles, the venue took a little getting used to, better signage on the first day would have helped, but that was sorted out by day two. An on-site bar was promised which is essential to a perfect conference and your Fortean Londoner may have been the only person to actually find it. However these complaints are trivial compared to the wonders of the Unconvention.