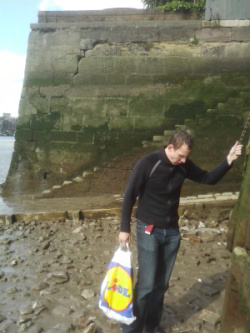 We liked Chris McCabe's London Word Festival show Shad Thames, Broken Wharf so much we wanted to share a bit with you now it's been published as a limited edition, signed, boxed mini-book. Each box contains an object mudlarked from the Thames by the author.

Chris McCabe was born in Liverpool in 1977. He has published two collections of poetry, The Hutton Inquiry (Salt, 2005) and Zeppelins (Salt, 2008), a pamphlet The Borrowed Notebook (Landfill, 2009), and Shad Thames, Broken Wharf (Penned in the Margins, 2010). He works as Joint Librarian of The Poetry Library and lives in London and Liverpool with his wife and son.

Echo Eggs - that's all we seemed to eat - and only because the budget had frozen the price. The funny thing is, I got really good at cooking them. Fried usually, the fat crisped like honeycomb un­der the white. Sometimes boiled - timing the bubbles to precision - to save any hassle. He'd scoop out the yellow oblivious - unless it was too hard. Yoke on the racing form. Even with that tension I'd miss him within ten minutes of him going out. I'd drink cup-after-cup of tea - watching the river - all its different lights never matching my moods. It wasn't enough - I wanted his tension be­fore I'd finished the first cup. My bladder filled and slacked - it felt like I was keeping the Thames going in water

Blaise I drink nothing stronger than stout before lunch

Echo I thought it was earlier than it was - I woke because of the white at the window and this burning pressure for a piss. The bathroom was small but if I stood in the bath I could see across the docks - flats and embankment in the snow. I watched a fox through the communal gardens, a path of black clovers from its paws. Funny thing is, I had this urge to share it with someone, it almost made me pass out. I went to his room - his elbows and knees parcelled underneath him from the cold. I tucked the blan­ket over him. Meadow I used to say to myself when I was anxious - I pictured the word, even in all that decay - meadow. Listen, the meds were wearing off. They always did at that time of night. But I put the two together - blood-pressure like a trip-switch in my neck - snow, meadow. I repeated it over and over until I fell asleep, snow, meadow, snow-meadow

Blaise Do you know the pub The Town of Ramsgate?

Blaise At Wapping? You can see the beer garden from here?

Blaise It snowed on me there. Down the alley between the black wall and the pub. Between the brass hoops and the condiments - the verdigris and the Sarsons - the snow came down. I stood on Wapping Old Stairs - between the wharf and the lanterns - with a smoke and a pint of the black stuff. The flakes drifted into the pint and stayed there, unmelted, like pendants. Imagine falling all that way, leisurely-kamikaze, then bedding onto that! The waves against the steps were like drowned kids pushing each other out of bed, like drunks clawing back to wives - each wave made bids for its ownership of wet. Grasped at, smashed the stone - the steps pushed them back again

Echo It's always colder on the river, colder than anywhere

Blaise The waves like vexed bosoms, rising in peaks, the low winter sun streaked across - the joint work of an alchemist and a plasterer. Across the river: Cherry Garden Pier

Blaise A blanket of emerald moss, cotton-soft on the steps. The crumpled bullion of a B&H packet. It should have been calmer than it was, the beer garden abandoned for the winter. I watched this boxed-in corner of river, its brown whorls and ejaculations - the timber frames of the Ramsgate groaning - the river a thin mud gruel felching cracked pipes. All this flotsam: branches, twigs, the base of a traffic cone. It was forecast to arrive for days but I saw it first, those first thick flakes - Dorito-flakes - in disappearance on the steps and in the Guinness. The gulls shrieking at last in a natural place. I pictured their snowshake against the Millenium Dome

Blaise We're going round in cycles. Circles, I mean

Shad Thames, Broken Wharf is a 'play of voices', commissioned by London Word Festival and first performed in Cable Street, March 2010. It is published by Penned in the Margins as a limited edition, signed, boxed mini-book, priced £9.50. Each box contains an object mudlarked from the Thames by the author. Available from Amazon and Waterstone's.