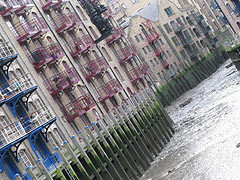 Shad Thames by RobC'ham
A friend of ours has an iPhone app which locates him by GPS then populates a Google Map with layers of local activities: restaurant reviews, what’s on listings, even the just-had-a-biscuit updates of tweeters in the area. Chris McCabe takes a similar stratified approach to geography in his Shad Thames, Broken Wharf, a London Word Festival commission which received its premier at Jamboree in Cable Street last Thursday.

Introduced by notorious psycho-geographer Iain Sinclair as less a play for voices than a ‘happenstance’, 'Shad Thames, Broken Wharf' is a multiple narrative of various timescapes, set in a constantly evolving Docklands. McCabe layers the reflections and experiences of The Landlord (played by the poet himself), local woman Echo (Tracey Wilkinson) and Northern blow-in Blaise (Luke McKewen), drawing in and out of their lives as if eavesdropping conversations on the DLR. The Restructure (Paul Henderson) is a couplet-spouting chorus figure: half hedge-fund trader, half CCTV camera. His sinister, knowing presence underpins and oversees Echo and Blaise’s conversations - ‘THE RESTRUCTURE / confesses that all past footage of docks has been retained / to instruct Developers to build all towers in glass / to showcase the bricks as they’re covered in moss.’

A dense and beautiful stylist, McCabe prizes pattern-making above narrative drive. Here’s Blaise out in the Docklands weather ‘It snowed on me there. Down the alley between the black wall and the pub. Between the brass hoops and the condiments - the verdigris and the Sarsons - the snow came down.’

Counterpointing the textual episodes were specially composed musical interludes: repeating orchestral figures echoing the slap of waves on the shore, played live by Bleeding Heart Narrative, a loose collective of string players and noise makers led by Oliver Barrett. Jack Wake-Walker’s filmic postcards of Dockland sights - mute swans and huge cranes - were projected onto the stone walls behind the performers.

Fans of Chris McCabe’s hypnotic Scouse rhetoric might regret the way his own Landlord figure, once introduced, never returns; and that the actors’ rip-tide rush of a performance means that his words evaporated before they had a chance to soak in deep enough. But the Festival has plans to publish the text of this happenstance in a pamphlet, and will possibly recalibrate the show so it can tour elsewhere. The Jamboree’s packed and whooping audience would surely encourage you to seek both out.