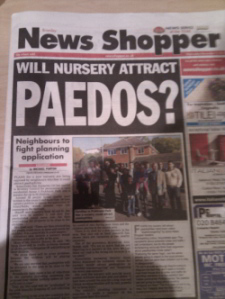 We've brought you news about nurseries getting paranoid when it comes to protecting their little charges, but how about this for a reversal - Bromley residents don't want a nursery near them because it might attract PAEDOS.

The News Shopper reports that Sunnyfields Day Nurseries's application to turn a house in Pickhurst Park into a nursery has prompted 30 objections to the council and a petition of 140 signatures, mainly concerned with traffic, parking and increased noise. But when one mother happened to mention a worry that "paedophiles will be attracted to the area to be close to the nursery", with a couple in their sixties musing "there are flats overlooking and people could move in there and watch the children. It is a possibility it could happen" (as we muse: they don't seem that bothered about it. Is there a 'possibility' someone has suggested the scenario to them?), the local issue of the News Shopper took it as a cue to start yelling about PAEDOS.

This is ridiculous. PAEDOS aren't even the main objection to this planning application, but PAEDOS do make for a more arresting headline than "exacerbated parking problems". Regular readers may recall the News Shopper in Lewisham and Greenwich awarding a homophobic letter its star prize earlier this year and being rather pleased with the ensuing furore: is this more evidence of a race to the bottom? Or is this the start of every school being picketed by mobs objecting to PE kit offering the salacious flash of a pre-teen calf? We all know PAEDOS can't resist...

We believe the photo of this week's News Shopper is courtesy of Matt Sawyer, but if anyone knows differently please let us know.