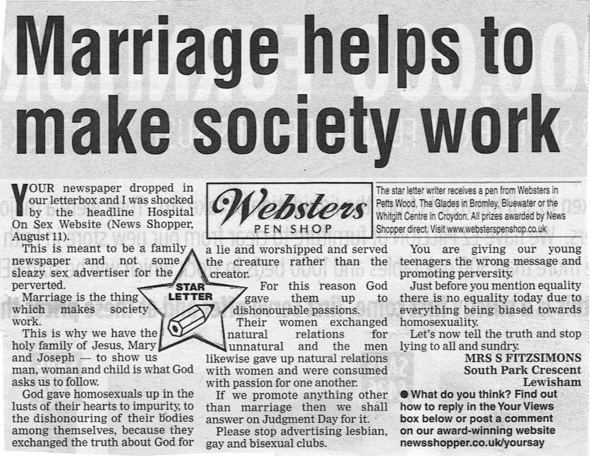 Local paper News Shopper has rewarded an anti-gay letter with its star prize. Mrs S Fitzsimons, of Lewisham, wrote to complain about a recent front page story detailing areas in the borough listed as cruising grounds by a website (which, uh, by the way, is really not front page news). "This is meant to be a family newspaper," she writes. Quite. Oh, but then she continues... "and not some sleazy sex advertiser for the perverted".

Other choice snippets include (our emphasis):

Marriage is the thing which makes society work. This is why we have the holy family of Jesus, Mary and Joseph... God gave homosexuals up in the lusts of their hearts to impurity... If we promote anything other than marriage then we shall answer on Judgement Day for it... Just before you mention equality there is no equality today due to everything being biased towards homosexuality.

We wouldn't be suprised if this letter was written in green ink. What is surprising, however, is that the News Shopper saw fit to implicitly endorse such sentiments by making it the week's star letter and giving Mrs S Fitzsimons a pen from Webster's Pen Shop (who have issued a statement repudiating the letter).

Is the News Shopper similarly contrite? No. 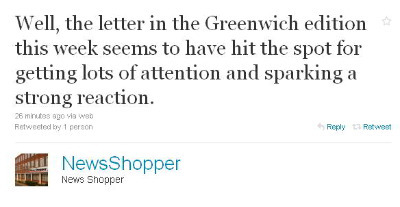 "Hit the spot"? Are we to conclude that the News Shopper deliberately chose to print and reward a homophobic letter in the hope it would get them attention? Perhaps the News Shopper would like to rethink the old adage, all publicity is good publicity.

Except that by calling it the "Star Letter" and giving it a prize, it looks exactly like an endorsement of the author's views. 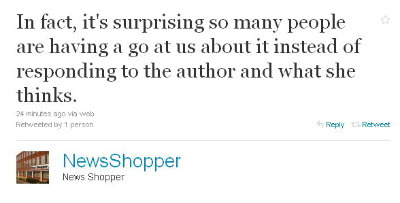 There is a small grain of truth in this. However, that grain is dwarfed by the large mountain of truth that the News Shopper could have chosen not to print something that - they apparently hoped - would prove so inflammatory. The News Shopper could not have given it top billing. The News Shopper decided to give Mrs S Fitzsimons a platform. They are delivering these words into people's homes across Greenwich and Lewisham, unasked for, and they need to take some responsibility for it. We find this policy of saying "nothing to do with us guv" utterly despicable.