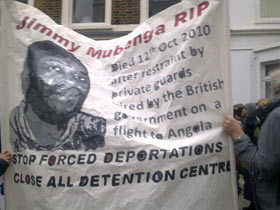 ‘What do we want? - Justice! Justice for who? Jimmy Mubenga!’ ‘No borders! No nations! No deportations!’ Central London echoed to the chants of 200 hundred protesters on Friday as they marched from the Angolan Embassy, along Oxford Street and down Park Lane, bringing traffic to a halt before converging on the Home Office.

The march was led by the wife and children of Jimmy Mubenga, the Angolan deportee who died on 12 October on a British Airways flight while being deported from Britain. Passengers witnessed him being forcibly restrained by three security guards employed by the private security contractor to the UK Borders Agency, G4S, while he shouted "They are going to kill me" and that he could not breathe. He is thought to have died from asphyxiation.

On the march was Ayo Omotade, who in 2008 was himself forcibly removed from a BA flight to Nigeria after protesting about the treatment of another detainee who was being forcibly restrained by G4S guards, and was screaming “I go die”. As he told demonstrators, he was then charged with affray and banned from all BA flights; police confiscated his money, as ‘criminal proceeds’ and dumped him, penniless, at Heathrow airport. It has taken Mr Omotade 14 months to clear his name.

The family and organisers, the Union of Angolans in England, were supported by anti-racist, anti-deportation and human rights groups; the rally outside the Home Office was addressed, amongst others, by a member of the Mubenga family, by Deborah Coles of Inquest and by Labour MP Jeremy Corbyn. A letter presented to the Angolan Embassy asked for support in demanding answers about Mr Mubenga’s death from the British government. At the Home Office, the family laid a wreath and asked the Home Secretary to reconsider the use of force during deportations.