Cycle Hire Rolled Out To Casual Users In December 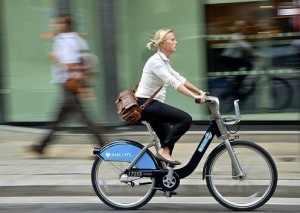 Four months after they appeared on the streets of the capital, Cycle Hire bikes will be made available to casual users from December 3rd, TfL has announced. From that date, anyone in possession of a credit or debit card (Visa / Visa Electron or Mastercard only) will be able to rock up to a docking station, put your flexible friend into the slot, and rent one of the bikes.

Since the launch, over 100,000 users have registered, and they've made 1.7 million journeys so far. At times Serco, who operate the scheme, have struggled to effectively manage the redistribution of bikes, though measures are being taken to address this — a huge new docking station at Waterloo, one of the busiest parts of the network, is due to be finished shortly. It'll be interesting to see how effectively the scheme works with what will probably be a significant increase in users, and whether the number of accidents, which has been minimal thus far, remains low once any half-cut chancer can rent one out for a wobbly ride home.

In other Boris bike news, the scheme has been awarded with the 'Best Cycling Facility' prize by the London Cycling Campaign.